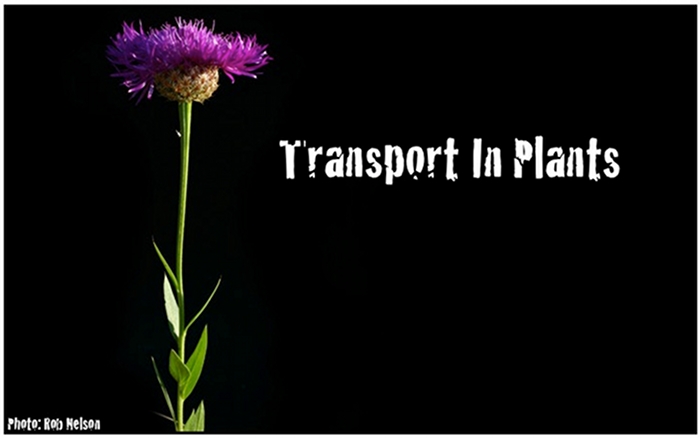 Transport is the movement of things from one place to other. It happens all the time. For example, you might transport the stinky bag of trash in your kitchen to the curb for garbage pickup. Or you might be transported from the bus stop to school or work. Transport happens inside our bodies, too. Our heart is connected to a superhighway network of veins and blood vessels that make up our circulatory system, which is responsible for transporting nutrients from the burger you ate throughout your body from your nose to your toes.

What about transport in plants, how does a Redwood, one of the tallest trees in the world, move water from the soil to the needles on its tallest branches over 300 ft in the air? (That’s over 30 stories high!) Or how does a carrot transport the sugars made in its green, leafy tops below the surface of the soil to grow a sweet, orange taproot? Well, certain types of plants (vascular plants) have a system for transporting water, minerals, and nutrients (food!) throughout their bodies; it’s called the vascular system. Think of it as the plant’s plumbing, which is made up of cells that are stacked on top of one another to form long tubes from the tip of the root to the top of the plant. To learn more about it, let’s study the stem.

Ah, the stem, the part of the plant that connects the leaves to the roots! But, not all stems are similar! For example, cactus stems are swollen and store water. Some stems twist and have grasping tendrils like the pea plants growing up a garden trellis or lianas in the tropics.

Other stems are covered in thorns, providing lyrical inspiration for 80s power ballads and making the stem less palatable to herbivores. Stems give a plant structural support so they can grow upright and position their built in solar panels (leaves) towards the sun, but stems are also flexible allowing them to bend in the wind and not snap. Despite the shape or modification, inside every stem of a vascular plant is a bundle of tubes, and this my friends is where transport happens in the plant.

To understand transport in plants, let’s start with a little stem anatomy. Imagine that you’re holding a handful of drinking straws and chopsticks with a rubber band around them. 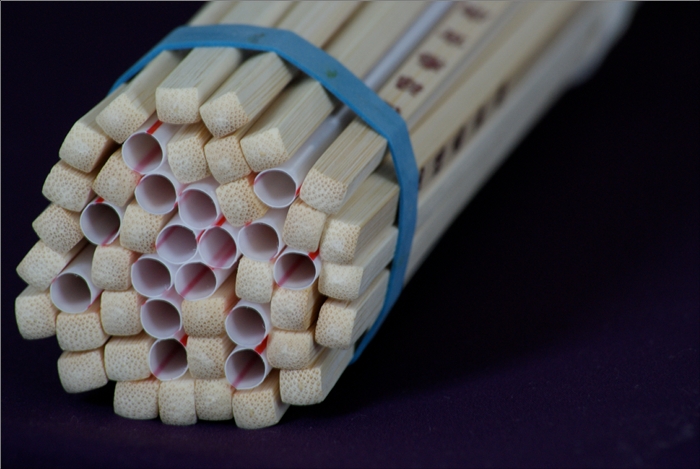 This bundle is your imaginary plant stem.

The rubber band, the drinking straws, and the chopsticks represent the three types of tissues found in vascular plant stems. The rubber band symbolizes the dermal tissue that covers the outside of the plant stem, and like our skin it acts as a protective layer. Ideally the rubber band would completely cover your makeshift stem bundle, so you’ll just have to use your imagination. The chopsticks fill in the space between the rubber band and the drinking straws and represent what is called ground tissue. Ground tissue is made up of cells that provide structural support to the stem. The drinking straws represent the third tissue type, the vascular tissue. Depending on the type of plant, the drinking straws might be arranged in the stem in a very organized way or scattered throughout haphazardly. Regardless of their arrangement each straw has a job to do; either transport water and minerals or transport sugars.

In our example, the straws that transport water and minerals up from the roots to the leaves are called xylem (zy-lem). Now imagine that each straw is actually a certain type of cell stacked one on top of the other creating a tube. Depending on the type of plant, xylem tissue can be made up of one or two different types of cells. Plants like ferns and conifers have xylem “straws” that are made of slender cells called tracheids. At maturity these cells die, leaving behind a rigid cell wall scaffolding tube to conduct water and minerals. Flowering plants have an additional type of xylem tissue called a vessel element. Like tracheids, vessel elements are dead at maturity, but unlike tracheids, vessel elements are much wider – more like a smoothie straw! This means that they can transport more water at a faster rate. Just think of how much faster you can slurp a soda with a wider straw! Just because vessel elements are wider, doesn’t necessarily mean that they’re better. Vessel elements are prone to getting little air bubbles caught in them, and once an air pocket occurs, the party is over and it is very difficult to move water up the stem.

Back to our imaginary plant stem, the remaining straws transport food made in the leaves to the rest of the plant and are called phloem (flo-um). Phloem tissue is also made up of two types of cells that are less rigid and much more lively than their water carrying compatriots (no really, they don’t die at maturity like xylem cells do). One cell type does the heavy phlo-ing, while the other is the wingman. Here’s how it works: sieve tube elements are masters of flow. They stack one on top of the other separated by perforated plates creating the tube-like structure we’re familiar with. Sieve tube elements clear almost everything out of their cells that could slow the flow including organelles and even their nucleus! Anything that’s leftover gets squeezed up against the cell wall like pushing all the chairs to the side of a room so you can break dance in the middle. The sieve tube elements are busy, but they couldn’t do it alone. Directly connected to the sieve tube elements through holes in their cell walls are their faithful buddies the companion cells. These cells have all the necessary cellular machinery to keep themselves and their adjacent sieve tube element alive and kickin’. And while companion cells don’t conduct food along the stem of the plant, they do play an integral role in loading food into and out of the sieve tube elements.

PRIMARY AND SECONDARY GROWTH: IT TAKES TWO TO TANGO

But don’t forget, plant stems can grow in two directions. Our imaginary plant stem helps us to visualize what the inner workings of a soft, green herbaceous stem – similar to what a dandelion stem might look like.

The dandelion stem will grow in length until it’s taller than the grass around it in your lawn – making it an easy target for the lawnmower. We call the increase in stem length primary growth. How does a stem actually get longer? Do the individual cells along the stem just keep getting bigger and bigger? Nope! (But individual cells and their cell walls will elongate to a certain size.) Primary growth originates in the apical meristems or places of rapid cell division, which are located at the top of the growing plant and at the tips of the roots. New cells are made in the apical meristems, so plant length increases by adding these new cells to the end of the stem, just like if you were using wooden blocks to build a tower. Each block you add to the top increases the height of the structure.

But what about stem growth in a tree? How does the trunk of a tree grow to be so much thicker than a dandelion stem? A tree seedling stem will start off green and flexible but over time, the tree will grow larger, become woody, more massive, and will need structural support to keep itself from falling over. The tree does this by increasing the width of the stem, which is called secondary growth.

WATER AND NUTRIENT TRANSPORT: WHAT MOVES YOU?

So now we know what parts of the stem are responsible for transporting water (xylem) and nutrients (phloem), but we don’t know yet how they move or what drives their movement. Keep in mind that one requires energy and one does not. 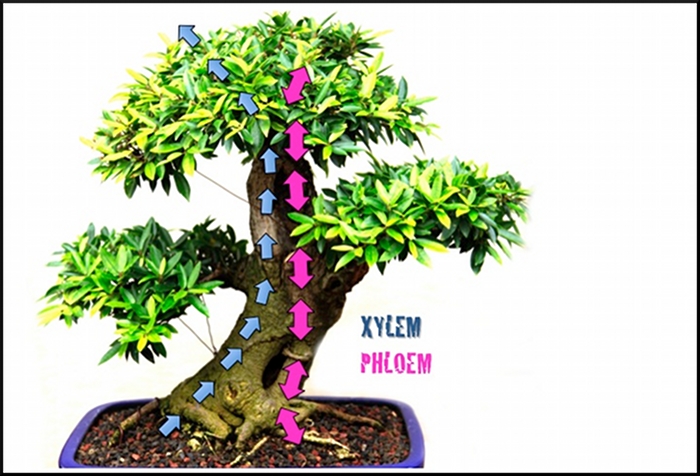 Now let’s move onto the sweet stuff, phloem. The movement of sugars in a plant is much different than the movement of water. First of all, phloem can move both up and down a plant, which comes in handy when a plant needs energy down below to grow new roots, or when a tasty apple is developing on a high branch. The sugars are made in the leaves as a product of photosynthesis. To get the food made in the leaves to other parts of the growing plant requires energy. So, with the help of some water from the xylem, sugars are actively loaded into the phloem where the sugars were made (which is called the source) and actively offload where they are needed (which is called the sink). Ever seen a dumb waiter in an older home? Phloem loading and unloading works sort of the same way. Someone in the kitchen can open the door and put a plate of food inside the mini elevator, then with the help of some energy and a pulley system, the tray of food is taken up the elevator shaft to another floor where someone opens the door and retrieves it. In plants the movement of nutrients through the phloem is driven by where the sugar is most needed for the growth of the plant.