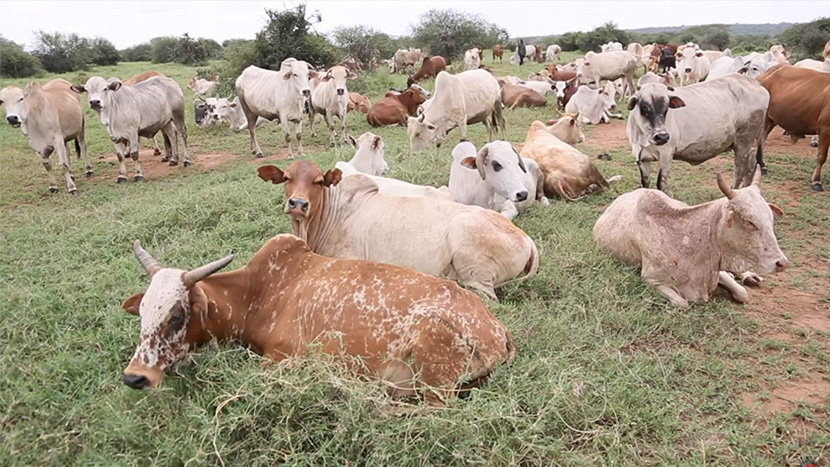 You may have heard the exciting news – that feeding cattle algae can reduce the amount of methane they produce and can even be economically beneficial, however, if you got curious about these claims you might be getting some mixed messages about whether or not this is true. So, what is the deal? Can feeding cows algae help reduce their greenhouse gas emissions?

If you are coming here for a straight “yes or no” answer, we are going to have to disappoint you by saying this: evidence points to algae having great potential for methane reduction in cattle, but there are some doubts to its feasibility on large scales, read on to understand why that is!

Livestock are an important part of people’s diets and industry around the world, but they are also a huge problem when it comes to our environmental impact. For example, two-thirds of agricultural land, which makes up about 38% of the Earth’s terrestrial surface, is pastureland for grazing livestock, and a lot of water goes into keeping livestock healthy, and processing products from them (meat, milk etc.). Additionally, in terms of greenhouse gasses, around 24% of global methane emissions of all human-related methane emissions come from the methane that ruminant livestock (mainly cows and sheep) produce during digestion.

Despite these issues, eliminating livestock from our lives is not feasible, for a multitude of reasons, so instead, researchers are looking for more sustainable practices for agriculture, including ways to reduce methane emissions from ruminant livestock, especially cattle.

This research also not only benefits the environment, but the economy. Cattle lose about 2-12% of their energy intake in the process known as methanogenesis, so reducing the problem could mean cows lose less energy during digestion, making animals more productive. Additionally, some of the feed additives being explored, such as algae, could even improve the health of livestock through things like beneficial lipids and different sources of protein.

Why do cows produce methane?

We aren’t going to go into detail on the process of ruminant digestion, but essentially, grass and rough foliage is hard to break down, so cattle and sheep have a special organ called a rumen where the breakdown takes place. The animals will continually swallow grass into this area, then spit it back up to chew it up more, so there is more surface area for break down. Once back in the rumen, the grass is broken down by fermentation, with help from methanogenic archaea, among other microbes, and methane is released. Contrary to popular comments about “cow farts harming the environment,”  The cow actually burps up most of the methane gas.

Here is a great diagram from “Benefits and risks of including the bromoform containing seaweed Asparagopsis in feed for the reduction of methane production from ruminants” by Glasson et al. 2022 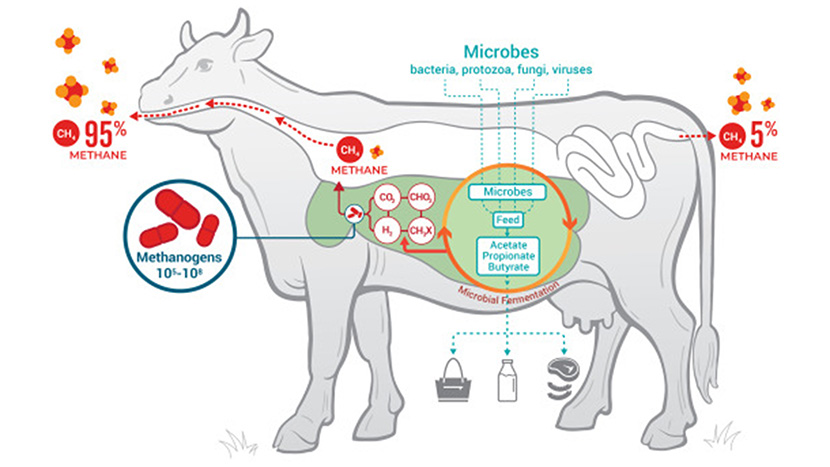 There are many ways that people have worked to reduce methane in cattle, including introducing different microbiota or yeasts into their system, certain grains integrated into the diet, tannins, and more, along with the inclusion of algae, which is what we are looking at here.

Technically the short answer is yes, feeding cattle algae has been shown to reduce their methane emissions, sometimes quite drastically, however, is it feasible, sustainable, and economically viable on large scales or over the long term? This is where it gets more complicated.

Seaweed has actually been fed to livestock in coastal regions since early agriculture thousands of years ago, so adding algae as a supplement to cow food would not be anything novel, but researchers need to figure a few things if it is to be implemented as common practice, such as:

And as it turns out, this answer is a little bit different depending on the region, the species of cattle, the type of diets they have, and various other factors, but let’s look at the problem in the most general way possible.

There are many species of algae and some candidates for algae to feed to cattle include:

Where the Asparagopsis genus is one of the most promising and is being studied more heavily. 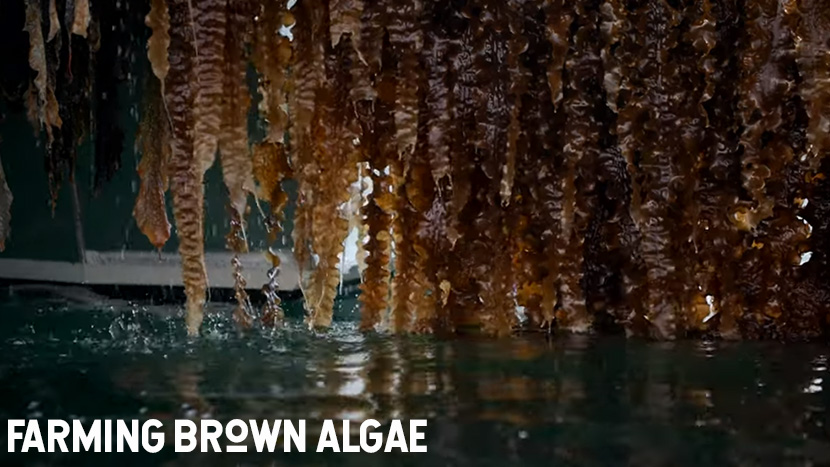 So how can algae reduce methane emissions from cattle?

Bromoform is one of the major players in reducing the methane during the fermentation process, but lipids and fatty acids, docosahexaenoic acid (DHA), peptides, and carbohydrates could also play an important role.

Long story short, Asparagopsis, and the bromoform it contains, can inhibit the methanogenic pathway, reducing methane produced. The energy that would normally be lost as methane is actually converted into more beneficial metabolic products, though more hydrogen is released as well. Additionally, the more readily available carbohydrates in algaes do not require the same level of fermentation, creating other more beneficial compounds as opposed to so much methane by-product.

Is algae a feasible solution to our methane problem?

Many people are skeptical of this incredible solution to the cattle-methane problem, and this is mostly because there is a lot more research to be done in order to reach conclusions about how well it works on a large scale. Even with the evidence, it is important to be skeptical, because it is often the case that when we find a potential way to reduce greenhouse gas emission, headlines run away with the idea, or it is even pushed by the stakeholders who it benefits. Just like the case with biofuels, this is probably not the “save-all’ solution it is labeled as. So, let’s get into it.

Part of the gap in research is that a lot of experiments so far have been in-vitro, or in the lab, and not put into large scale practice yet, or one type of algae has been shown to work in a certain species in vivo, and not another. For example, this study on dairy cows that fed an abstract from algae meal showed no reduction in methane emissions. However, there are many other experiments that have shown drastic reductions in methane and show a lot of promise in the future of feeding cattle algae, as you can see in some of the following reviews.

This 2020 review and this one showed that Asparagopsis has an incredible potential to reduce methane emission in cows, but highlights the difficulties in sustainably and economically growing enough algae to offset methane on a large scale. It also importantly notes that too high concentrations of algae (around 15%) in feed make it unpalatable for cows, and can alter the quality of meat and dairy products – but as you will see in a newer review below, this concentration is not necessary. The second review also importantly noted how growing algae could also help the economy and provide jobs by utilizing this “somewhat-new” resource, though farming algae for people to eat has been around for quite some time. Overall, the researchers claim that with more refined research, feeding algae to cattle is a promising mitigation strategy. 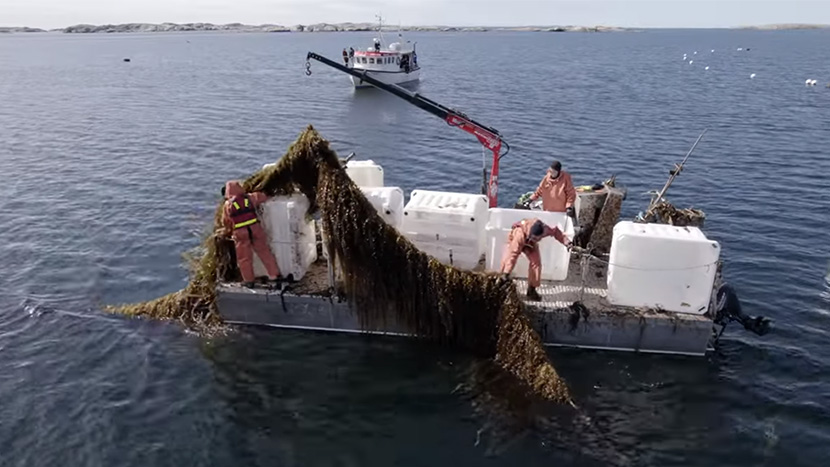 This 2022 review covered a variety of strategies for reducing methane, which is a good reminder that a combination of strategies would likely be the best approach to tackling this issue. In terms of feeding algae to cattle to reduce methane, they had multiple examples of successful in-vitro studies, as well as studies using live sheep and cattle, but also found a few studies that showed no differences. The conclusions here once again called for more research, especially about whether significant methane reduction lasts long term and how these strategies impact animal health and economy. As a conclusion, the authors insisted that methane reduction is both economically and environmentally beneficial and needs to be optimized and implemented.

Last, this 2022 review, though also mentioning mixed results and research gaps, showed a lot of potential for algae supplements for cattle. They found that with only about 1% of algae in the diet of cattle, methane could be drastically decreased. They also summarized that current research shows that animal health, product quality, and human health is not negatively impacted by algae supplements given to cattle. Though they cautioned that there needs to be more studies on how other byproducts, like H2, impact animals and the environment, they concluded that current research shows little to no negative impacts of feeding algae to cattle to reduce methane emissions.

In general, there are still a lot of gaps in the research, but algae supplements for cattle have a lot of promise to reduce greenhouse gasses. In experiments, there are a lot of varying results depending on location, food available,  breed of cattle, and more, so case by case studies will be important to making this system really work.

As the population grows and so does our demand for resources, it is important that we find new ways to reduce our impacts and live more sustainably. Adding algae into the diet of cows shows a lot of promise in helping reduce the impact of the livestock industry but research needs to continue in order to optimize this process. Furthermore, even though feeding algae to cows may help us reduce their methane emissions, the demand for livestock still heavily impacts land and water resources, so a reduction in the amount of meat and dairy consumed should still be reduced in order to live a more sustainable future.

Learn More About the Future of Algae

Check out this video, which gives a great overview of the potential uses of algae in the future!