The Basics of Ocean and Wave Energy

We seem to be in a time of transition as of late, where the problems of fossil fuels are giving us an incentive to take up the drive for greener, alternative methods of energy. Ask anyone what those are and they’ll surely tell you about wind energy and solar energy. How many people would suggest energy from the ocean? Turns out, the first wave energy collection buoy was just deployed for commercial use in the US off the coast of Oregon. That’s big news. But, what does this really mean for us? That’s the topic for our weekly video!

The best example of this form of energy collection is in La Rance, France. There they have essentially built a barrier (barrage) across the river whereby they let water in as the tid flows up, and then harness energy from it as the tide flows out. In a recent report from the the European Union stated that: “Ninty percent of today’s worldwide ocean energy production is represented by a single site: the La Rance Tidal Power Plant (240 MW) that was commissioned in 1966. This type of installation has remained unique in the world and has only been reproduced at much smaller capacities in Canada (20 MW), China (5 MW) and Russia (0.4 MW).” “This type of project was abandoned for many years because of very high initial investment costs as well as the strong local impact that results from it. However, the present economic situation has encouraged South Korea to build a 260 MW dam closing off Sihwa Lake, which is set to be commissioned in 2009. Lighter new techniques, like hydro turbines, are being developed today to harness ocean currents. The leader in this field, the British company, Marine Current Turbine (MCT), should install 1.2MW in Northern Ireland following its 300 kW pilot project in Bristol Bay.”

Instead of building a barrage, which essentially acts like a hydroelectric damn, an alternative is to put turbines in the water. They’d act a bit like an underwater wind farm. Water is much denser than air and thus, a small movement of water could produce a lot of energy. Unfortunately, these devices are currently bit expensive and only generate electricity up to 4 times a day as the tide goes in and out.

The concept for this type of energy production is to utilize the thermal gradient in the ocean to create energy. Essentially the surface water of the ocean is very warm and the deeper you go it gets cooler. You could use the temperature gradient to heat up and cool down a gaseous substance like ammonia. The expanding gas could be used to power a turbine. Not all places are ideal for this energy production, however. It is important that there is about a 38 degree Farenheit temperature gradient between the surface water and the deep water for this to work.

Wave Energy may hold the best potential for creating energy from the ocean. There are endless waves that pound the shore each year. Here are some of the basic forms.

One of the simplest forms of energy generation is to have a floating buoy on the sea surface. While different companies have come up with different ways to use the up and down motion of the waves to create energy, we’ll highlight here the OPT buoys. The up and down movement of these buoys help turn a turbine, which generate electricity. This electricity is then sent to substation underwater, which is the then sent to grid  onshore. One benefit is that the buoys can be set out and pulled in with minimal cost. The big news with energy buoys is that they represent the first wave energy devices available for commercial energy manufacture in the united states. In fact, along the coast of Oregon, the government has issued a permit for 10 energy buoys that should be enough to generate electricity for 1,000 homes. 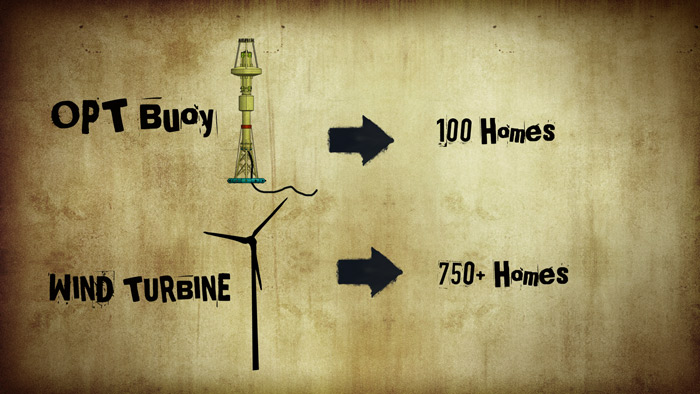 The company that has pioneered this version is Pelamis. They have a giant red snake that floats in the ocean to convert wave energy into electricity. The name Pelamis comes from the name for a surface swimming sea snake. The Pelamis snake generates electricity as the hinges move up and down. There is hydrolic fluid that moves back and forth moving a motor to generate electricity. The nice thing about this sort of energy aquisition is that you can have a bunch of snakes floating out at sea to generate a lot of energy wired back to shore.

If you’ve ever been to a rocky cliff zone and seen a blowhole, you will understand that the rising and falling of ocean waves along the cliffs, can force air rapidly up through the hole. This form of wave energy takes advantage of that concept. The first energy generator of this kind, the Limpet 500, was put into use in November of 2000 on the island of Islay off Scotland’s west coast. The only problem I see with using this form of energy generation on a grand scale is that it takes away the shorelines aesthetic value. One or two might not look so bad along a coastline, but imagine the entire rocky shoreline replaced with these concrete power stations.

This short video is one of the best I’ve seen to summarize all the different types of energy that could come from the ocean.