The Class Sarcopterygii, the lobe-finned fishes, contains only a few living representatives – the coelacanth and six species of lungfish. The relative scarcity of these fishes around the world may indicate an unsuccessful evolutionary history. Yet, a relative of this group is thought to have given rise to terrestrial vertebrates, which come only second in vertebrate diversity to the ray-finned fishes. However, due to relic naming conventions of scientists in the past, modern land vertebrates (tetrapods) are not included in this class. In fact, it is somewhat confusing to explain the relationship between these fish, whose fins have bones in them, and modern terrestrial vertebrates.

Most modern classification systems reflect evolutionary ancestry. All living representatives of an ancestor are grouped together. All mammals for instance are grouped in the Class Mammalia – they share a common ancestor. However, in this case, the class Sarcopterygii should contain all descendants of lobe-finned fishes including mammals, reptiles, amphibians, and birds. Since mammals are not included in the class Sarcopterygii, this class is considered a paraphyletic group. Mammals, for instance, remain in their own class mostly because of the history of classification.

Modern taxonomists branch the lobe-finned fishes into three major groups – the Coelacanth (Coelacanthomorpha), and the Lungfish (Dipnoi) and Land vertebrates (tetrapods). For the purposes of this overview of the group, we’ll concentrate on the first two – coelacanths and lungfish. For tetrapods, see birds, mammals, reptiles, amphibians, etc.

The existing living representatives of lobe-finned fish are truly remarkable. Most people will probably never see one though. Lungfish are found in muddy waters of Africa and South America and only a handful of people have ever seen a living Coelacanth. But, because of their unique similarity to us, both in their bony fins and their respiratory adaptations, they’re a popular topic for scientific discussion and a relatively good deal is known about them.

We’ve simplified the scientific literature about the classification of living lobe-finned fishes into the following graphic: 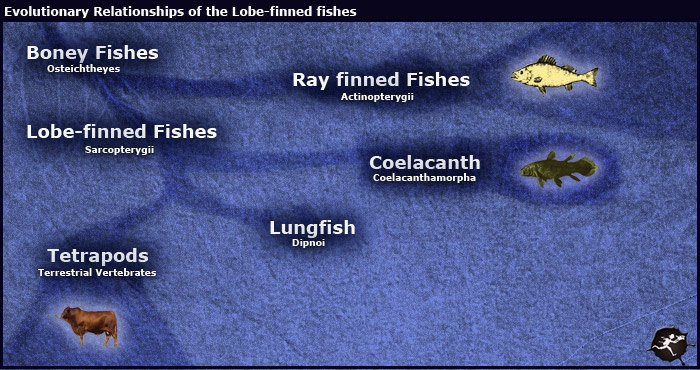 Notice that lungfish and tetrapods are closer related to each other than lungfish and coelacanths. The following are the living orders:

At some stage, a long time ago there was a single lobe-finned fish whose progeny over millions of years became the different species we know to today. At the time of their diversification (a time known as the Devonian), lobe-finned fish were taking refuge in freshwater. It is believed that the predatory placoderms that roamed the ocean were putting significant evolutionary pressure on other fish. One lobe-finned fish however, never left the ocean. We know it as the Coelacanth.

Coelacanths were thought to be extinct until several were found in the early part of the 19th century off the eastern coast of African between Mozambique and the Seychelles. The most famous place for Coelacanth discovery are the French colonial islands known as the Comoros. For those interested in the history of the discovery, there is a well written popular book on the subject, entitled A Fish Caught in Time.

The reason Coelacanths were discovered only recently, was due in part to the fact that they live in deep waters. Only rarely do they ever venture into depths that humans might be able to see them. On only a few occasions have divers have seen coelacanths. In fact, we profile a video shot of the west Indian Ocean coelacanth while diving here.

Not all fish obtain oxygen from gills. The six species of living lungfish are but a few species that obtain oxygen in ways other than their gills. They have a pair of lungs similar to primitive land vertebrates. Lungfish typically live in freshwater habitats that are prone to drying out in dry seasons. Unlike other fish that require water to ‘breathe’, lungfish can survive in moist burrows for extended periods of time. Thus, their adaptation to breathe air has allowed them to survive when the water dries up.

The characteristic that seems to define sarcopterygians (lobe-finned fish) is the fleshy fins that are joined to the body by a single bone. Other fishes, like the ray-finned fishes (Class Actinopterygii) have fins with rays or spines. The articulations of the fins of sarcopterygians resemble those of land vertebrates. Lobe-finned fishes also have two dorsal fins, each arising from different bases. 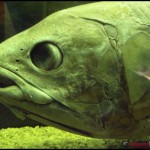