Imagine going on a beautiful Caribbean vacation and taking a snorkeling adventure. You’re swimming along a beautiful reef full of colorful fish. Suddenly, out of nowhere, a huge gray and white shark shows up beside you. Before you hit the panic button, take a second to breathe. It’s very likely a Caribbean reef shark.

These large sharks are the most common type of sharks you’ll find cruising along a reef, and they’re mostly harmless. An encounter can be a bit scary since they do sort of look like Great White sharks to the untrained eye, but these sharks have more to teach you than you have need to fear them. 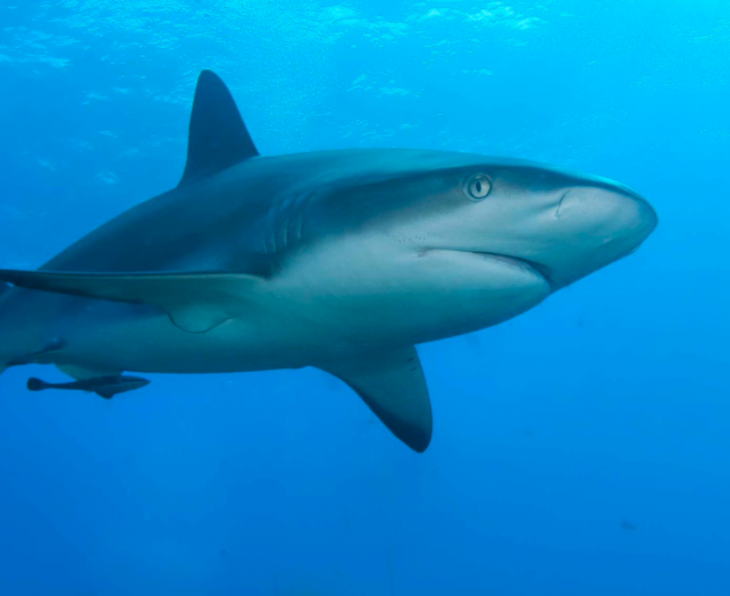 Where can you find Caribbean reef sharks?

Caribbean reef sharks are found exclusively in the Western Atlantic Ocean, from North Carolina down to Brazil. They are one of the most common shark species in the Caribbean Sea.

These interesting sharks prefer to swim near the bottom of reefs, which is why it’s so common for them to interact with people. After all, we enjoy a nice colorful reef tour, too! These sharks don’t venture out too far into open water, like mako sharks or porbeagle sharks, so it’s unlikely you’ll see them from your cruise ship as you travel from one port to another.

How do Caribbean reef sharks reproduce?

Since Caribbean reef sharks are so plentiful and common, you’d expect that they’d have a high reproductive rate and pop out shark pups like little pinballs. But in fact, these sharks have a very low reproductive rate, especially compared to some prolific species like leopard sharks.

Female Caribbean reef sharks will only give birth every two years, and only to a small litter of three to six pups. What’s fascinating about Caribbean reef sharks is that they reproduce through placental viviparity. This just means that the pups are attached to their moms via a placenta while she’s pregnant with them—just like mammals!

Although Caribbean reef sharks are large and do have the potential to injure people, they’re generally not considered dangerous.

In fact, according to the International Shark Attack File, only four unprovoked attacks from this species have ever occurred on humans, and none of them were fatal (although it was certainly a bad day for the shark bite victims). This is especially impressive, considering that Caribbean reef sharks are one of the most common large sharks that people encounter while in the ocean.

Instead of people, Caribbean reef sharks cruise the bottoms of reefs looking for dead, dying, or sick fish. They’re more like the vacuum cleaners of the reefs than aggressive human-hunters.

What are the threats to Caribbean reef shark populations?

There are many potential threats to Caribbean reef sharks. They are heavily targeted by humans because they’re so common, and they are very valuable to fisherman.

Every single body part of the Caribbean reef shark can be used. Its jaws can be used as ornaments (ever seen a set of shark jaws hanging up in a sushi restaurant?); its liver is used for oil; its fins and meat are used for food; and its skin can even be made into leather. The remainder of the shark’s body can be ground into fishmeal to be used in gardens as fertilizer or as animal feed.

Additionally, Caribbean reef sharks are also commonly caught as bycatch by fishermen. After all, they are fish-eaters and do hang out where the fish tend to be.

How can I see Caribbean reef sharks in the wild?

If you’re diving on a reef full of fishes in the Caribbean, there’s a good chance you’ll see a Caribbean reef shark out of the corner of your eye. Some tour operators even hold shark-feeding tours for the adventurous tourist diver. These are illegal in the U.S. but are quite popular in the Bahamas and other island nations. Here’s a video showing what these tours look like:

These shark-feeding tours are controversial. There’s a lot of pros to them. They provide a great source of revenue for tour operators and give them an incentive to help the sharks, rather than harvest them indiscriminately. They also help make everyday people more aware and interested in sharks, and less afraid of them. That’s a huge positive, because a fear of sharks can hurt conservation efforts.

But critics say it’s ethically wrong to feed wildlife. It’s possible that these shark-feeding tours can train sharks to associate people with food. This is exactly what happened with brown bears in Yellowstone National Park in the early 1900s when park officials allowed bears to eat out of landfills, providing people with good (albeit messy) photo opportunities.

Finally, it’s also possible that the Caribbean reef sharks will tend to stay in a particular location if they know they’ll be fed there. That could allow fisherman to target them even more heavily (wouldn’t you want to go to the good “fishing hole”?).

So far, the jury is still out on whether shark-feeding operations are beneficial or not. But one thing’s for sure: the more people showing positive interest in these amazing creatures, the better.