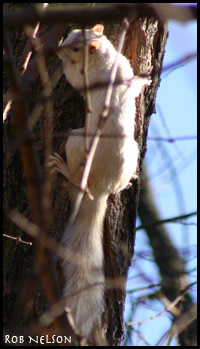 The Eastern Gray Squirrel (Sciurus carolinensis) is also called the Grey Squirrel. It is a common native tree squirrel in the eastern United States and Canada. This squirrel’s range covers most of the deciduous forest belt of North America where it thrives. The only squirrel that it is commonly mistaken for is the fox squirrel (Sciurus niger), which it sometimes overlaps ranges with.