Weighing up to 1800 pounds, the polar bear is the largest of the three North American bear species. Polar bears’ heads are longer and narrower than grizzly bears’ or black bears’. Their noses are very large, and their small, round ears are fur-covered, inside and out. The front legs of polar bears appear slightly bowed and pigeon-toed. Their back legs are long. Polar bears’ claws are shorter and more strongly curved than grizzly bears’ and are larger and heavier than black bears’ claws. Polar bear teeth are adapted for grabbing prey and shearing meat and hide. Unlike grizzly bear teeth, their teeth are not well equipped for chewing vegetation.

Adaptations for Survival in a Harsh Environment

Classified as marine mammals, polar bears exhibit specific adaptations to an icy, aquatic environment. A thick two- to four-inch layer of fat, or blubber, helps insulate polar bears from freezing temperatures and ice-cold water. It also helps them float. During the summer, when food is limited, blubber acts as a nutritional reserve.

Polar bears’ dense, thick undercoats are protected by long guard hairs that stick together when wet, forming waterproof barriers. Although their coats appear white, each individual hair is actually a clear, hollow tube. These hollow hairs fill with air, holding in body heat and insulating from the cold. It is debatable if these hairs also help keep polar bears warm by funneling solar radiation to their black skin. At times, polar bear fur may appear yellowish due to staining or impurities that accumulate inside the hollow hairs.

Polar bears are excellent swimmers, reaching speeds of up to six miles per hour. They have been observed swimming 100 miles from land. Their large, partially webbed forepaws function as paddles while their hind paws act as rudders. To prevent water from entering their ears when diving, their ear canals close. On land, polar bears’ large, flat feet help them shovel snow to create dens. Small papillae and little indentations on the footpads provide traction. The bottoms of the paws are fur-covered.

Male polar bears spend the winter on the pack ice. Pregnant females, however, dig out a snow cave early in winter. The snow covers them as winter progresses. While in their dens, they give birth and nourish their new cubs. This period may last eight months. During this time, they survive off their fat reserves. Like other North American bears, polar bears may wake during hibernation in response to environmental or physical stimuli. When the cubs are approximately three months old, the family emerges from the den. Although pregnant female polar bears enter dens for the entire winter, any polar bear may create a shelter to avoid storms, extreme temperatures, or periods of poor hunting.

Polar bears are primarily carnivores (meat eaters). They usually prey on ringed seals and bearded seals. They have several hunting strategies. Polar bears may stalk seals by slowly creeping toward them on the ice. They also “still hunt” seals by lying in wait near the seals’ breathing holes and quickly grabbing them with their sharp front teeth when they come up for air. Polar bears eat only the fat rich skin and blubber of the seals. Polar bears also prey on beluga whales and walruses. When the ice melts and polar bears cannot hunt these meat sources, they may eat voles, carrion, seaweed, berries, bird eggs, and grasses. Like other bears, polar bears eat humans’ garbage, too.

Infrequently, polar bears are killed by walruses or in fights with other bears. However, human activities such as oil and gas exploration, climate change, habitat change, and hunting are some of the serious threats polar bears face.

There are also places were polar bears are hunted by humans, despite efforts by conservationists. Learn more about threats to the polar bear at PolarBearInternational.org. 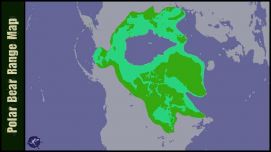