Whether people like to believe it or not, the natural world is currently experiencing drastic changes as our human populations continue to grow. Along with this rise in population comes an increase in our impact on natural habitats, either directly and/or indirectly. In another video from Untamed Science, Jonas looked at the protection of the panda bear (Ailuropoda melanoleuca), which is a species that has been heavily impacted by direct human influences, such as habitat loss. In this video, Rob discusses the status of the polar bear (Ursus maritimus), which is a species that is currently at risk due to our indirect impacts, such as greenhouse gas emissions, that have resulted in drastic global climate change and a frighteningly rapid loss of sea ice. The IUCN Red List has listed polar bears as vulnerable, largely due to their reliance on this ice, but are polar bears really going extinct, and is there any way for them to adapt to the change?

Each year we lose more sea ice from the Arctic, but do polar bears really need it to survive? Yes, they do. Polar bears are extremely locally adapted to their environment, which means they are really successful in a very particular environment, and they will have a hard time adapting to a drastic change in their natural habitat, such as loss of sea ice. As much as it has been debated, there is plenty of evidence that polar bears do need ice in order to hunt the nice fat marine mammals that they need to survive. So, with the loss of sea ice, we can almost certainly expect a large decline in polar bear numbers and perhaps even their extinction.

The world has changed throughout geological time, and during this change organisms must adapt to their new environments, and many of them do. So, polar bears should be able to just adapt to the current change they are experiencing, right? Not so much.

First off, polar bears are extremely carnivorous, and it is difficult for them to get enough nutrients and high energy fats from anything other than the marine mammals they eat for most of the year. Secondly, the speed of ice loss in the arctic is likely too quick for polar bears to be able to adapt to. Therefore, it is highly unlikely that the polar bear could make the changes necessary to survive without ice if it continues to melt at the current rate. 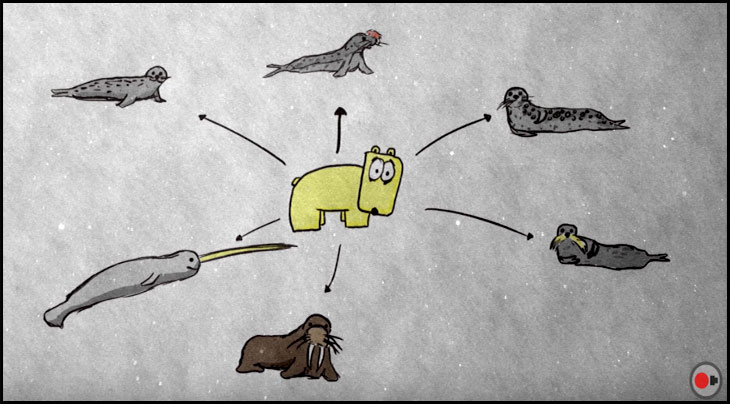 Now what about interbreeding with grizzly bears to create an awesome new hybrid? This is a tricky one. Polar bears and brown bears are able to interbreed, but there have only been a few cases documented in the wild, and most of them can be traced back to a single female polar bear. In most cases, polar bears and grizzly bears do not get along, so they are considered behaviorally sexually isolated; they could reproduce but they are different enough that they often never will. So, interbreeding is possible, but is not a likely solution to saving the polar bears. Besides, then we would have a bunch of hybrids and no true polar bears, so technically polar bears would still go extinct.

What can we do?

If we do want to save the polar bear (which I know we do!), we need to begin to better mitigate our impacts on the changing climate by reducing our greenhouse gas emissions. Lobby your politicians for greenhouse gas reductions, be a part of the change yourself, go into (or even help to fund) green energy research, and let’s try to reduce our human footprint, so that future generations can live knowing that polar bears still roam the Great White North.