The Science of Compost - Basic to Advanced
MENU Skip to content

The Science of Compost

The practice of composting is becoming more widely used on both small and large scales as we begin to realize its amazing range of benefits. But what is composting, really? And how does one take day-to-day waste and turn it into the “black gold” that is compost? 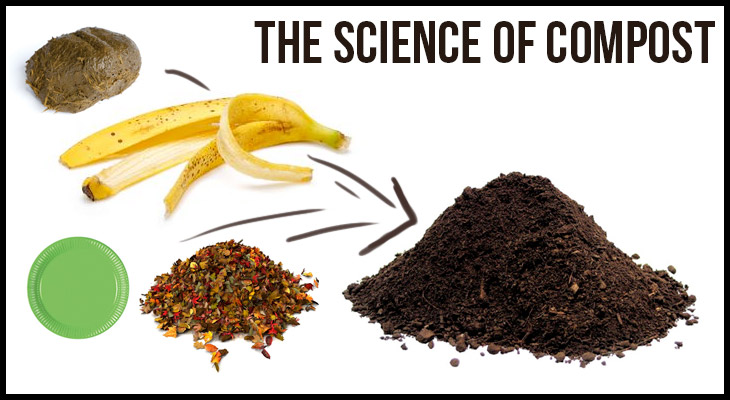 To start off, let’s be clear, you cannot just throw a big pile of waste together and expect a good compost result. It will decompose, no doubt, but there are ways to optimize it in order to get the most out of your heap!

Before we get into the nitty gritty science, let us take a quick look at something that you probably know: humans produce a lot of waste, and we are wasting it.

With an ever-increasing population, one of the largest human-impact issues worldwide is our waste. We have an overabundance of food waste, sewage, livestock manure, landscaping waste, etc., and we are simultaneously faced with ever-shrinking landfill space, diminishing resources, and detrimental effects of our poor waste disposal. Furthermore, we are wasting that waste. Much of what ends up in a landfill still contains high amounts of nutrients that could be reused.

So how can we reduce this impact and utilize this abundance of unused nutrients? Well, we can do what nature has been doing all along. We can break down and re-use this waste – we can compost. Composting can help to reduce the amount of waste we have and allow us to apply these nutrients back into other systems, such as crop agriculture.

Here is a quick definition, with a breakdown to follow: Compost is crumbly, dark, humus-like material that is the result of the controlled aerobic biodegradation of organic material—or composting.

First, let’s clarify humus-like. Humus ((h)yo͞oməs) is a part of soil that contains recently broken down organic material, such as plants, dead organisms, manure etc. Essentially, it is the part of the soil which contains all the recycled nutrients from a system that can be used again. It generally is a lot darker in color and more moist than the rest of the soil, contains a large amount of nutrients and living organisms, and is a large portion of the topsoil in a natural ecosystem.

Next, what is aerobic biodegradation? Aerobic means that it is a process that happens in the presence of oxygen, and biodegradation is the breakdown of organic materials into their basic elements, and into humic material, by living organisms.

Lastly, why is the word controlled important? Biodegradation of organic material is a natural process, and it occurs without any type of assistance. However, when dealing with concentrated wastes produced by humans, there is a specific process required in order to ensure we produce “good compost,” which will be explained later on. 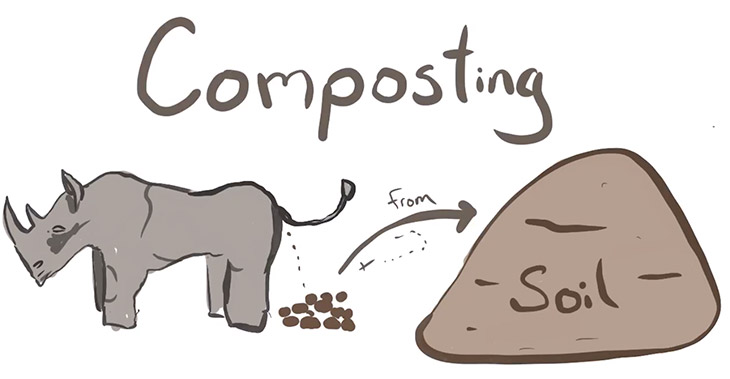 How does compost happen?

As mentioned above, the process of biodegradation occurs naturally; however, composting is a more controlled process for biodegrading organic waste, where waste isn’t just left to rot in hopes that it will turn into nutrient-rich compost.

The compost process requires oxygen in order to be effective, because the organisms involved are mainly aerobic, meaning they require oxygen to live and therefore to break down substances. These organisms consume and use up the organic material for energy (carbon), to build proteins (nitrogen), and for other cellular processes (phosphorus, sulphur, etc.), and in doing so break down complex organic structures, such as plants and feces, into their more basic elements. During this process they produce the humic-like compost we desire, as well as CO2, heat, and water vapor.

Some anaerobic fermentation—biodegradation without oxygen—is also required in the compost process, especially to break down more durable plant structures, such as lignin (the complex structure that makes up the secondary cell wall of plants and helps them to stay rigid). However, the majority of decomposition must remain aerobic for efficient, rapid composting with minimal odor production.

There are thousands of tiny organisms that are involved in the compost process, including fungi, microbes, actinomycetes (a unique type of bacteria that look like fungi), and invertebrates. The use of earthworms to enhance the compost process is called “vermicomposting.”

The process of decomposition involves a complex food web and a multitude of interactions between these numerous species. As well, different organisms are better at breaking down different elements in a pile of compost. Some organisms are better at the break down of cellulose or hemicellulose (other slightly simpler parts of the plant cell wall), and some for lignin. There are also cases of symbiotic relationships between microorganisms, such as bacteria and fungi, that help to optimize the biodegradation process. Interestingly, there is also a unique population of these microorganisms depending on how long the compost heap has been composting or the thermal phase of the composting process.

The graph below shows these thermal phases of compost. Initially there is a rapid growth of mesophilic (medium-heat loving) microorganisms and some thermophilic (high-heat loving) fungi. During this stage there is rapid consumption of amino acids and a huge growth in microorganism populations, which increase the heat to the point of their own destruction.

Next, there is a dominance of thermophilic microorganisms from all three groups (bacteria, fungi, actinomycetes), though some mesophilic organisms may survive through this phase. The majority of composting occurs during this phase, where the plant wall materials such as cellulose and hemicellulose are broken down. Once the temperature approaches 70 ºC (158 ºF) the compost is sanitized because the pathogens (that affect both plants and humans) are killed. Additionally, this intense heat kills any seeds from unwanted weed plants, making the compost better to use as fertilizer.

Finally, as the resources are depleted and converted by these microorganisms, the process begins to slow and the temperature drops. At this point mesophilic organisms once again thrive, pushing out the majority of thermophiles. Then the compost begins to cool and mature, and BOOM! You have beautiful “black gold” that can be used in other systems as a source of nutrients.

What makes a good compost?

Composting is considered different than natural decomposition because it is normally a carefully controlled environment. There are a number of factors involved in effectively creating and managing a good compost heap that results in desirable compost.

A good compost heap is one in which all of the material is broken down relatively quickly, with reduced odors; is hygienic (has destroyed all pathogens); does not contain viable seeds from weed plants; emits lower greenhouse gases while breaking down; and retains the highest possible amount of nutrients for later use as fertilizer.

In order to maintain this, control of the following variables is key: temperature, moisture, oxygen, chemical and physical composition, and size and shape of the heap. There is an optimum range for each of these elements to produce the most efficient compost.

However, in general, a good compost heap simply has a good mix of materials (woody, dry material and rich, organic material), is kept moist, is aerated, and is maintained at a size and shape that is sufficient for the process to occur but is not so big as to stop oxygen from reaching the center.

Now, depending on the scale of composting, the exact numbers and the amount of work needed to maintain these elements varies, but here is the scientific breakdown of a good compost heap…

Why should we compost?

Composting has a lot of benefits and very few downsides. First, compost reduces the amount of waste that goes to the landfill or gets incinerated and re-uses valuable nutrients that would have otherwise gone to waste. Food waste is a huge problem worldwide and throwing out a big portion of the food produced is a lot of wasted energy. 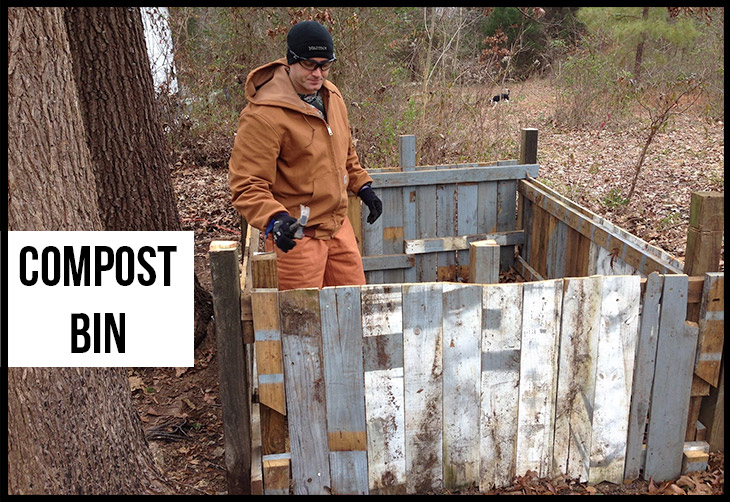 Second, compost can also be used as a safer, cheaper, and more environmentally friendly alternative to synthetic fertilizer in agriculture or in your home garden. Compost material is also better than using raw manure because the heat generated during the process kills dangerous pathogens and seeds from unwanted plants.

Third, composting can be extremely beneficial to human health and economy. If done properly, the composting process kills harmful pathogens and can help reduce human health hazards caused by waste; which is especially problematic in areas of the world with high population densities and/or low resources to deal with waste. Composting can also lead to job production and a means to remediate soils in a cost-effective manner.

Last, compost is lighter and has less volume than raw waste, which means we need fewer vehicles to move it, an environmental and economic benefit. Once the compost is produced it can be moved long distances, from areas of high nutrients—where we have lots of livestock, for example—to areas with nutrient-poor agricultural soils. As well, compost can be used in land reclamation and soil restoration projects.

Just like any method of waste management there are possible downsides to composting. If compost is improperly managed there can be issues with odor, methane production, and heavy metal build up in the final compost. However, if compost is managed properly these risks are greatly reduced. Unfortunately, well-managed compost may still have problems, such as greenhouse gas emissions during decomposition and the land/infrastructure needed for the process. On the contrary, waste that is left untreated also emits greenhouse gases and can produce harmful leachate that can seep into precious water sources. As well, the land space used for compost can be reused again and again once the compost is removed and used, whereas landfill spaces stay relatively full. Essentially, any costs associated with composting are generally outweighed by the benefits.

Compost on a Small Scale

The great thing about composting is that just about anyone can do it. There was a lot of science explaining “perfect compost conditions” in this article, but as long as you maintain a good mix of ingredients, a bit of moisture, and ensure your compost is aerated, you can re-use your own home waste in your garden, on indoor plants, or even give it to your neighbors. In doing so, you can help reduce what goes into a landfill and use fewer artificial fertilizers, reducing your environmental impact and saving you a little money!

Compost on a Large Scale

Research on compost optimization improves every day, especially on how we can better implement large-scale compost and continue to reduce the waste that ends up in our landfills. Our knowledge of the optimization/addition of organisms involved in compost, how to best aerate compost at low cost, and what is the best way to obtain that perfect mix of materials continually increases and soon we will hopefully be composting and re-using almost all of the waste that we produce. The below photo is composting at the North Carolina Zoo 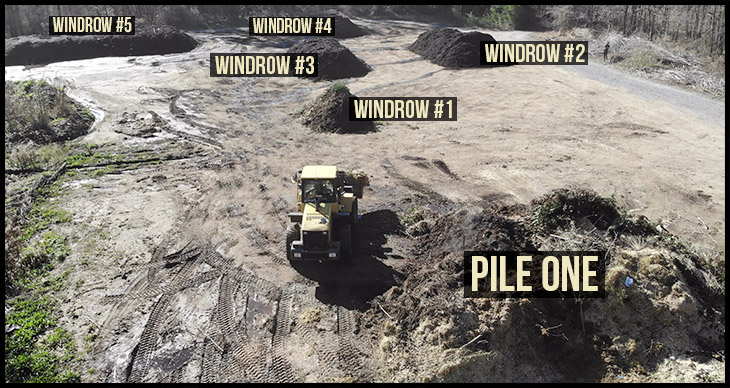 A good example of compost on a large scale is the composting process that takes place at the North Carolina Zoo in Asheboro, NC. At the NC Zoo, they process 2000 tons of compost every year! They manage to compost a huge percentage of the waste from the zoo, including manure from their large grazing animals. In fact, the main ingredients in their compost are rhino and elephant manure, and there is a lot of it. Check out the video to see the process from start to finish.