Why DSLR’s are Revolutionary

Filmmakers often say DSLR filmmaking is as revolutionary as the invention of color or 16mm film because it represents a huge leap forward in the quality of the image. Basically, a DSLR has a monstrous image sensor compared to the cameras filmmakers were using previously, about 20 to 30 times larger than that of the standard prosumer camcorder.

Here is a relative size comparison: 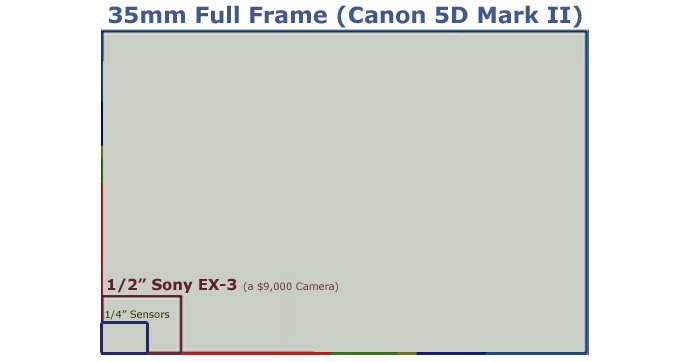 So what does this achieve? These are the main benefits.

Making a Film with a DSLR

Again, while a DSLR was never intended to be a movie-making device, the revolutionary quality of its video at an affordable price make it worthwhile for filmmakers to use them with some creative workarounds, mainly in the audio department. For those filmmakers that use separate audio recorders, like Zooms, Tascam’s or Marantz’s, the workflow is much the same. Here are a few points to think about when shooting with a DSLR.

The Benefits to Wildlife Filmmakers

When shooting wildlife, you may not always be in an ideal scenario. Perhaps you’re in a dark and shady forest or you’re far off in the arctic where the conditions make it challenging to stay alive, let alone lug around a heavy camera. Sometimes you’re in a third-world country where pulling out a giant camera brings a lot of unwanted attention your way. In these scenarios, a small, inconspicuous, lightweight, light-sensitive DSLR is the way to go.

Getting shots in the understory of a rainforest is one of our new favorite things. Before, we needed to bring lights with us to shoot frogs or millipedes that were crawling on the forest floor. Now, as long as there is some small amount of light, there is absolutely no problem shooting these shots au naturale. It saves us from carrying a lot of extra weight into the jungle.

The lightweight factor can’t be emphasized enough. It’s a breeze to bring the camera on exploratory walks. If you see something that is worthy of a good video shot, you can pull out the camera and capture it.

Finally, it is great to have diverse lens options. You can put on a fisheye lens to get a point of view shot or you can attach an extreme telephoto lens to capture some amazing animal behavior.

The Negatives to DSLR Filmmaking

The ultimate negative of the DSLR is a lack of audio functionality. The audio inputs on the camera make it difficult to shoot more than one person laved up at a time. There are ways to work around this, but it does make the filmmaking process a bit more difficult.

Jonas and I thought we’d share a quick tutorial about getting the most out of your DSLR.