How do chromosome genetics work?

A chromosome must have been a scary thing to see for the first few people who peeped into a microscope. They wouldn’t have had any idea what they were, aside from squiggly, wiggling little X-shaped bundles that appeared when cells were about to divide and then “dissolved” as soon as the cells were separate.

Chromosomes were discovered around the same time that Mendel was doing his genetic experiments on peas, but because Mendel didn’t do a great job at publicizing his results, no one really made the connection until scientists rediscovered his work decades later.

Mendel thought that some sort of inheritance factor must be controlling how different traits end up in pea plants across the generations; those inheritance factors (now called alleles) turned out to be located on the chromosomes!

We now know that chromosomes are a key feature in genetics because they actually are the units responsible for transmitting genes from one generation to the next. We’ve learned a ton about how chromosomes work since first discovering them, but we also have a long way to go.

What are chromosomes, exactly?

Chromosomes are basically bundles of protein and DNA with a special job: they get all the DNA within your nucleus from one cell into another. They form whenever a cell divides, whether it be in a skin cell in your big toe or a cell that later becomes another person (if you have kids). Chromosomes are how you got all of your genetic information from your parents!

To accomplish this monumental task, chromosomes rely on some pretty precise organization. Whenever a cell divides, it needs to wrangle up all of its DNA into discrete little packages, just like how you pack everything up into boxes when you move from one home to another. To form the chromosomes, the DNA is carefully wound around proteins called histones, just like how you wind up fishing line on a fishing reel.

The DNA-covered histones create a mass of strands called chromatin, which can actually be seen as a tangled clump when stained and viewed under a light microscope. The chromatin, in turn, arranges itself into a chromatid: one single, complete strand of DNA all wound up and arranged into a stick-like package. Each chromatid has a sticky button-like center called a centromere, which allows it to attach to another completely identical sister chromatid (you have two copies of your DNA, remember).

Not All Chromosomes Are the Same…

Humans may have a standard set of 46 chromosomes within their nuclei, but some organisms do things their own way—this pond protist, for example, sets the record with 15,600 chromosomes!

Most living things also have stick-shaped chromosomes, but bacteria are the odd ones out: they possess circular chromosomes!

Even within humans, our mitochondria have their own chromosomes that reproduce independently of our nuclear chromosomes. Plants have similar organelle-specific chromosomes within their chloroplasts, too!

Chromosomes are precisely organized packages that have to undergo precisely timed movements during the cell division cycle. There’s a lot that can go wrong, and it’s one of the reasons why many genetic diseases are caused by errors in cell replication.

To see how this works, we’ll look at a specific error that can affect chromosomes during cell replication called nondisjunction. Here’s how it works, one step at a time: 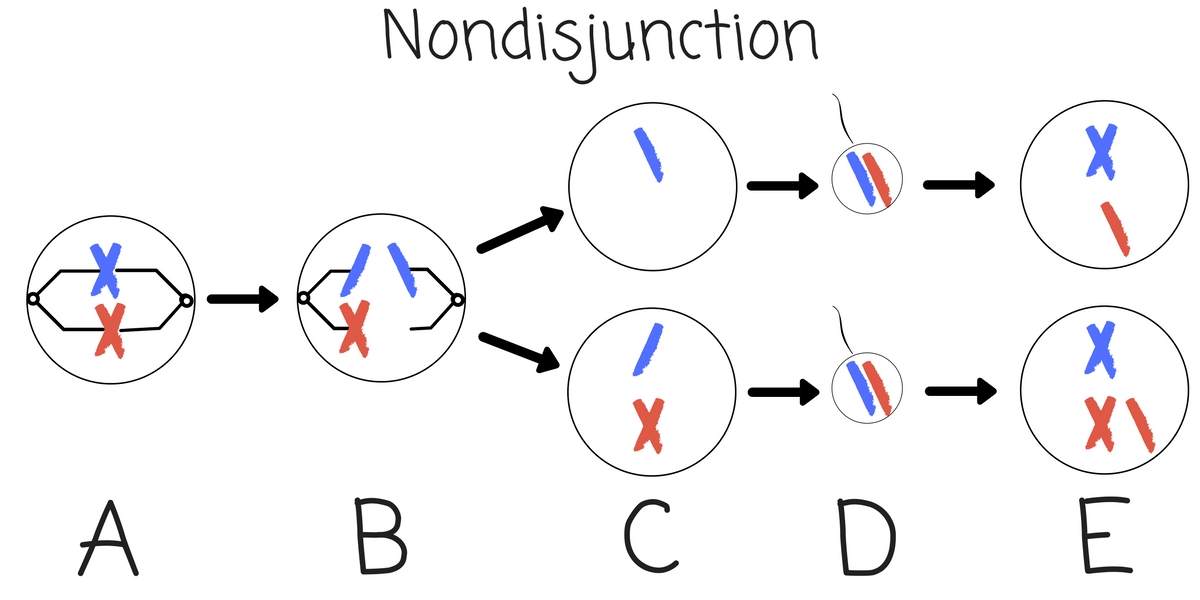 In Step A, an egg cell is just getting ready to complete its final division through a process called meiosis that produces 1n egg or sperm cells. This egg cell has only two chromosomes (way simpler than your own cells which have 46 chromosomes) which are lined up along the center of the cell.

In Step B, the chromosomes are pulled apart to opposite ends of the cell by spindle fibers. The blue chromosome gets split in half correctly so that each identical sister chromatid ends up in the final, divided cell. The red chromosome, on the other hand, does not split like it should. Oh no!

In Step C, the cell has finished dividing in two. Each cell has the correct amount of blue DNA (one chromatid), but one cell has twice the amount of red DNA (two chromatids), while the other cell is missing the red DNA!

In Step D, each egg cell is fertilized by a sperm cell, which has the correct amount of red and blue DNA (one chromatid each).

In Step E, each fertilized embryo has an incorrect amount of red DNA distributed among its chromosomes. The top cell has just one red chromatid, while the bottom cell has three red chromatids—one too many. The blue chromatids are correctly distributed, however—two per cell, bundled together into one chromosome each.

In humans, this can happen with any one of our 46 chromosomes. Because chromosomes contain such a large amount of DNA in them, though, it’s rare for a fetus with an incorrect number of chromosomes to survive. You might be able to survive a mutation in a single gene, but a nondisjunction error affects thousands of genes in one fell swoop.

It’s easy to diagnose cases of nondisjunction with a special tool called a karyotype, a picture that allows doctors to see which chromosomes—and how many—are present.

During cell replication, the parent cell produces two sets of chromosomes that will get distributed equally to each of the two daughter cells. When the cell gets ready to divide in half, each chromosome finds its identical copy (called a homologous chromosome) and aligns next to it in an intricate dance (sort of like the Macarena, but on a smaller scale).

Once the two homologous chromosomes are aligned, they’ll sometimes swap large chunks of the same DNA with each other like this: 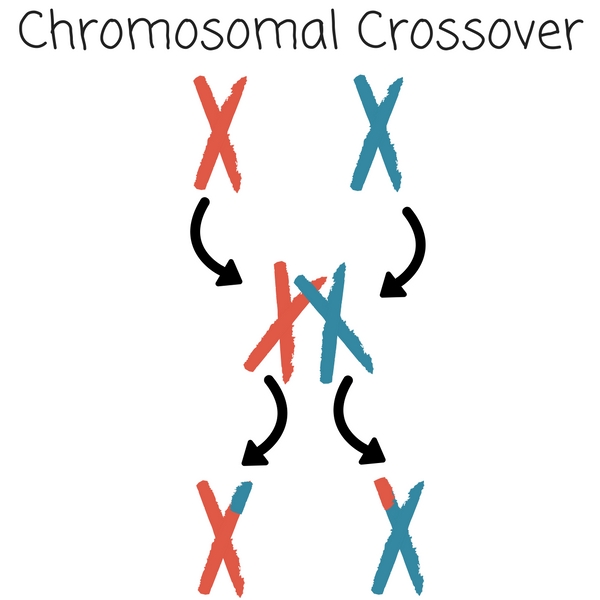 These swapped DNA pieces contain the same genes, but they might have different alleles—i.e., versions of the same gene. So, for example, the red and the blue chromosomes might both have genes for hair color, but one chromosome might code for red hair while the other codes for black hair.

Crossover is one of the major ways that genes get reshuffled across generations and allows new combinations to form. It keeps us fresh!

Scientists discovered how crossing over occurs after they noticed an odd thing happening in the lab.

The law of independent assortment gives very specific predictions about what percentage of offspring will have which traits, but he found something very different: some variations of the traits were more likely to be associated with each other than others.

For example, he predicted that only 6% of baby flies would have tiny wings with a black body, whereas 22% of baby flies actually had this trait combination! What could be causing these unexpected results?

It turns out that the genes for body color and wing shape occur on the same chromosome. This means whichever two alleles a parent fly has, they pass it on as a package deal to their offspring, and they aren’t reshuffled. This is why you sometimes see certain traits that occur together in nature. For example, certain coat colors in domestic animals are linked to congenital deafness. 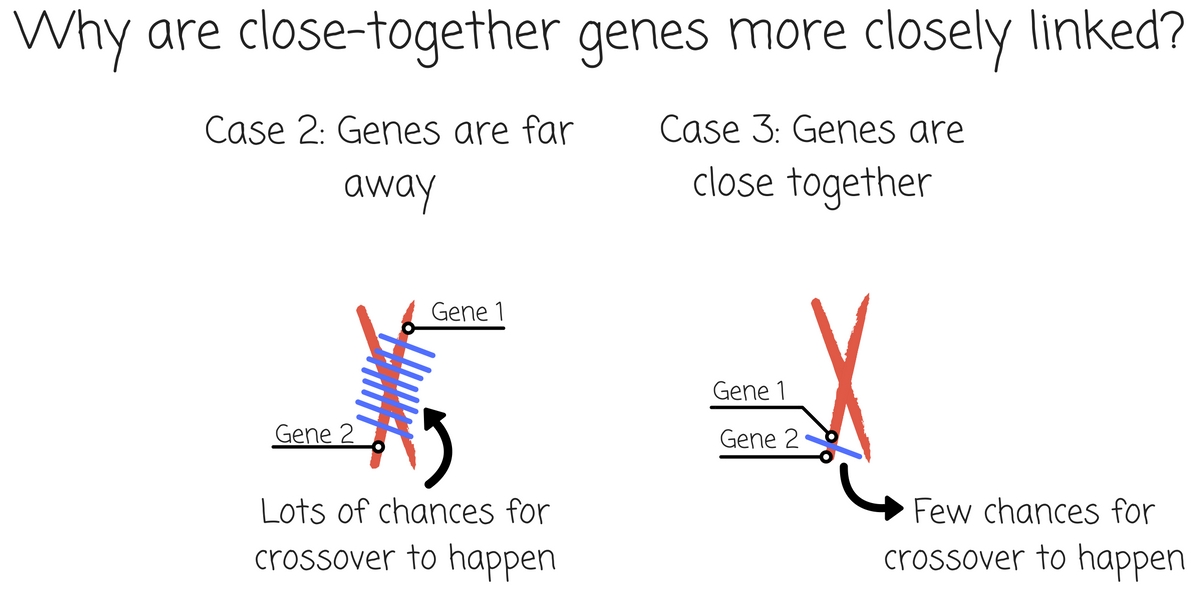 The closer two genes are to each other, the more likely they’ll always occur together. In one study, 25% of dogs with two copies of the Merle coat color allele showed some form of deafness. This is evidence that these two genes—coat color and deafness—occur very close together on the same chromosome.

Chromosomes are important to study for many reasons. They’re the main vehicles that get DNA from one cell into another and keep life as we know it flowing along. Otherwise, all life would eventually die out because there’d be no way for the blueprints of life to get from one cell to the next!

One area that requires an especially good understanding of how chromosomes work is genetic engineering. Scientists can engineer microorganisms to be tiny manufacturing plants, getting them to crank out all kinds of useful stuff like medicines or industrial chemicals. Scientists at NYU recently created an entirely new chromosome, for example, that may take the field into the future.

If you’re looking for a cool future career path, this is definitely one to explore further!