How do Mendelian genetics work?

All of these organisms required careful breeding to get them to where they are today, and we’re still constantly changing and tinkering with domesticated organisms. In order to breed organisms for their desired traits, we need to know how to reliably predict what’ll happen when you breed two things.

This brings up a huge problem: how exactly do you predict which crosses will yield desirable traits? It’s a problem that scientists have been working to solve for a long, long time. Scientists originally thought that all traits were a blend between the mother and the father, like making chocolate milk by mixing chocolate powder and milk together.

These weird cases defied explanation until the year 1900, when a few botanists came across a secret written decades before.

Gregor Mendel: The Father Of Genetics

Mendel had been puzzling about how to predict what offspring from different parents will look like. He knew that the blending hypothesis explained some, but not all of the results he saw from various crosses.

Mendel decided to get to the root of the problem by breeding peas. They were a perfect choice: they had a lot of clear-cut discrete traits that didn’t seem to blend, such as pea color, pea shape, plant height, etc. The peas either expressed one form of a trait or another; there was no in-between.

Peas also have short generation times, so he didn’t need to wait long to see the results of his test crosses. They were prolific: one pea plant can produce many individual peas to collect data from. Plus, fresh garden peas are a tasty research subject!

Let’s take a look at how one of these crosses worked. Mendel started out with two parent plants: one with green peas and one with yellow peas. If you crossed them you might expect to come out with yellowish-green peas. Instead, something surprising happened: he ended up with all yellow peas!

The peas resulting from a cross between parents with two different traits is known as an F1 hybrid, for Filial 1. If you cross the F1 hybrids with each other, they become F2 hybrids, and so on.

What on earth could be happening? It seemed like pea color is inherited in a helter-skelter manner. But, Mendel persisted and tried out these results in many other pea traits such as seed shape and plant height.

Mendel was the first person to ever describe the pattern of how these unique traits are inherited over generations. He didn’t know about DNA or genes yet, but he speculated that these patterns were caused by inheritance factors—what we now call alleles. 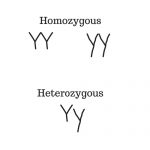 Each possible combination of alleles is referred to as a genotype: its genetic makeup. Each genotype leads to a phenotype, the trait we actually end up seeing.

Whatever the combination of alleles that a pea has, each allele becomes segregated from the other one during egg or sperm production, and therefore it can only transmit one allele or the other to its offspring. This is known as the law of segregation, or Mendel’s First Law: 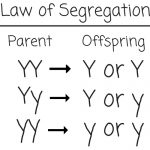 How Punnett Squares Let Us Predict Results From Crosses

Long after Mendel a simple tool came along called a Punnett Square. This tool uses Mendel’s law of segregation to predict what might happen when you cross two individuals. 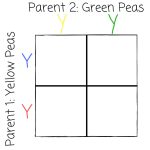 Now let’s find out what might happen if you cross these two parents. Fill in each box with its possible allele combination from its parent: 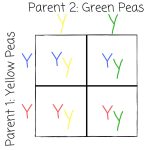 You can see from this cross between a plant with green peas and a plant with yellow peas how each offspring ended up with the exact same genetic combination: Yy. This is why the entire F1 generation had yellow peas.

This works well for one trait, but in reality organisms have thousands if not millions of genes! Mendel also wondered about this. How do different traits work together? He decided to track two traits at once.

In other words, each trait was independent of the other trait; no two traits were linked together. This is known as the law of independent assortment.

Let’s go back to Mendel’s F1 hybrid crosses between plants with green peas and plants with yellow peas. As we saw above with the law of segregation, each one of those baby pea plants had the genotype Yy. 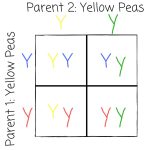 We can see this happening in the Punnett square above. Three quarters of the possible combinations have the dominant allele, while one quarter of the possible combinations has two recessive alleles. This matches up with what we see in reality: three quarters of these F2 hybrid peas have yellow peas, while one quarter of these F2 hybrid peas have green peas.

This is known as the law of dominance, and it’s one of the hallmarks of Mendelian inheritance.

These are the basics of Mendelian inheritance. Now that we know how it works, let’s look at a real-life example in something other than peas!

There are two possible alleles for the Rh factor: a dominant allele which encodes for a D antigen protein on red blood cells, and a recessive allele which does not encode for a D antigen, leaving the cell comparatively naked. If someone has a DD or Dd genotype, they have the D antigens and are Rh+. If someone has a dd genotype, they do not have D antigens and are Rh-.

D antigens are highly immunogenic, meaning that if a Rh- person comes into contact with Rh+ blood, they’ll have an immune reaction. This is why it’s very important for people with Rh- blood type to receive blood transfusions only from Rh- people.

Curiously enough, it’s even possible for a Rh- mother to develop an allergy to her own baby in some circumstances. To see how this works, let’s see what happens if a Rh- mother has a baby with a Rh+ father: 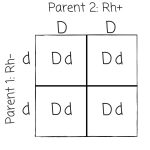 If the baby’s father was homozygous dominant, there’s a 100% chance the baby will be Rh+. (Bonus points: if the father was heterozygous, what would be the chance that the baby would be Rh+? Scroll to the end of this section for the answer)

There won’t be any problems for the woman’s Rh+ baby. But, when she’s giving birth she’s likely to come across some blood from her baby. Just like when you are exposed to an allergen and develop an allergy, the mother might develop an allergy to Rh+ babies.

If the mother gets pregnant with another Rh+ baby, her body might actually mount an immune reaction against her fetus. To prevent this, she must get a shot of a medicine called RhoGAM during her first pregnancy in order to prevent any problems with future pregnancies.

Mendelian inheritance is one of the first things we understood about how genetics work. Many traits work outside of these basic inheritance rules, but millions more traits still abide by these laws—which is why they’re essential to know.

Knowing how Mendelian traits work allows us to make better sense of our world. We can use these rules to predict the risk of many genetic diseases, identify parentage, understand evolution and how genes spread through populations and the world, create better approaches for conservation, and countless other things…like whether to buy green or yellow peas in the produce section!