What are genetic diseases?

Imagine you spelled a single word wrong in an instruction manual. Then, that manual was sent out and used in a manufacturing plant. The plant went on to make faulty products based on the error in the instruction manual. Those faulty products, in turn, were sent out all over the world where they wreaked havoc—all because of your one spelling mistake. That’s essentially what happens with genetic diseases.

A single error in the DNA code can cause your body to make the wrong types of proteins. Those proteins go out into your body. Depending on the type of protein, what its job is, and how widespread it is in your body, it might not have any effect at all or could cause widespread chaos.

While it’s possible to take medicine to cure common illnesses like the flu or bronchitis, genetic diseases are generally incurable. They’re literally written into the code of your body.

But there’s also good news: scientists are working hard as we speak to develop completely new technology that may one day permanently cure genetic diseases once and for all.

Genetic diseases are all caused by one or more errors in the parts of DNA that make proteins. If you have the genes that produce a genetic disease, it’s as much a part of you as your hair color or how many fingers you have.

Some genetic diseases are passed down as autosomal recessive alleles. Autosomal simply refers to the fact that these genes “live” in autosomes (non-sex chromosomes) and can affect anyone regardless of gender. Recessive alleles will be ignored by your body if the other allele is normal; but if you have two recessive alleles, you will have the disease. Your body won’t have a backup normal allele to read the code from.

On the flip side, if you inherit two copies of the disease-causing allele, you will have the disease. This is because the body doesn’t have a normal gene to reference. The only thing it “knows” is how to make the incorrect protein. 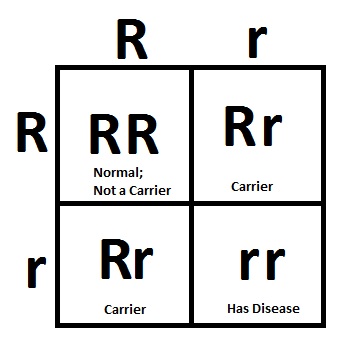 Most genetic diseases are recessive disorders. Some common ones you may have heard of include cystic fibrosis, Tay-Sachs disease, and sickle-cell anemia.

Do you know any balding men? If so, they may be suffering from male pattern baldness—a sex-linked genetic disease that’s probably the most common of any genetic disorder

Sex-linked genetic disorders affect men more often than women. To see how this works, we need to briefly review how chromosomes differ between men and women.

Women possess two sex chromosomes, X and X, which they got from their mother and father. If a woman has a child, she will only be able to pass on an X chromosome to her offspring, since that’s the only type of chromosome she has to give.

This Punnett square describes how this works. Can you think of a situation in which a female might have a sex-linked disease? 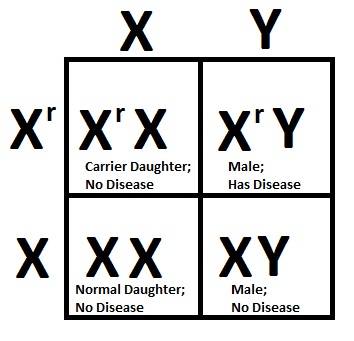 One of the most fateful cases of sex-linked inheritance occurred in the Romanov family, the last dynastic rulers of Russia. Tsarina Alexandra inherited one copy of the gene for the blood-clotting deficiency called hemophilia on her X chromosome from her grandmother, Queen Victoria. She was a carrier for the disease, but did not have it herself.

Tsarina Alexandra married Tsar Nicholas II and began having children. Her first four children were daughters who were totally healthy. The kids may have been carriers for the disease if they received one of Alexandra’s disease-causing alleles, but they were safe because they also received a backup copy of the normal allele from their dad’s X chromosome.

Then Alexandra gave birth to a son—finally—but he was unlucky enough to receive a copy of Alexandra’s disease-causing allele. He had no second X chromosome to protect him, so he got the disease. Small bruises and cuts became life-threatening situations because he could have bled to death.

In a desperate attempt to protect him, Alexandra fell into the bad company of Rasputin, a mystic who promised to save her son but instead took advantage of a position of power. This ultimately contributed to the demise and murder of the entire family by Russian revolutionaries.

Some genetic diseases aren’t caused by one allele at all, but rather abnormalities in entire chromosomes. It is possible to have either too much or not enough genetic material.

A person can have too much genetic material through a process called nondisjunction. When a parent’s cells are forming either eggs or sperm, they halve their number of chromosomes from 46 (what’s in their own body cells) to 23 (what’s in their sperm or egg cells). That way, a person’s children will have the normal number of chromosomes when their DNA is combined with the other parent’s DNA.

When nondisjunction happens, an extra copy of a chromosome accidently gets put into a sperm or egg cell. That child will have three copies of a chromosome—one more than they should have.

Chromosomal disorders can also happen through deletions—when a portion of an entire chromosome is accidentally broken off. In cri-du-chat (cry-of-the-cat) syndrome, a short portion of the 5th chromosome is completely missing, resulting in its hallmark symptom: an odd cat-like cry from infants.

You may notice that the chromosomal abnormalities resulting in diseases are pretty specific. There’s a good reason: people with these specific chromosome abnormalities can typically still survive with the genetic material they have.

Why do genetic diseases stay in the population?

By now, you’ve learned that genetic diseases can cause anything from minor annoyances like male pattern baldness to embryo death before a person even really starts to develop at all.

If genetic diseases have such harmful potential, you might wonder why they are even still around at all? Wouldn’t people with genetic diseases be unable or less likely to pass on those disease-causing genes to offspring? Wouldn’t the diseases gradually fade out of a population on their own?

There are many reasons why genetic diseases continue in our populations. Here are a few:

One of the biggest reasons that genetic diseases stay in populations is because new disease-causing mutations are always happening. The hemophilia-causing allele that led to the downfall of the entire Romanov dynasty was likely the result of one single mutation in Queen Victoria herself.

Genetic diseases may also stay in a population if carriers are more likely to be fit—i.e., to survive and have more children. It sounds strange, but it’s true: sometimes, having one copy of the disease-causing allele can actually be beneficial.

For example, people with one normal allele and one sickle-cell-anemia-causing allele are actually more resistant to malaria, believe it or not! In tropical places where malaria is common, people who are carriers for sickle-cell anemia are more likely to avoid malaria and have more children. The population as a whole benefits from increased fitness, unfortunately at the expense of the unlucky individuals who inherit two disease-causing alleles and go on to develop sickle-cell anemia.

In some cases, a genetic disease can persist in a population because the disease doesn’t manifest itself until after a person’s already had children (and passed on their disease-causing alleles).

Huntington’s disease is an example. People with Huntington’s disease generally don’t start showing symptoms until as late as 50. By that time, they’ve usually had children, and so the disease-causing allele has already perpetuated to the next generation.

Every cell in your body—all 37.2 trillion of them—has the same DNA. If you’ve got a genetic disorder, that’s at least 37.2 trillion errors.

Your genes are also immutable. Up until recently, that is…

One of the fastest-growing areas of science today is genetic engineering. Scientists can now go into the DNA of an entire organism and change it.

Scientists usually start out with single embryonic stem cell or a single-celled organism like bacteria and insert desirable genes (it’s a lot easier to edit the DNA of just one cell versus trillions). They can implant insulin-producing genes into bacteria to produce insulin for diabetics, for example, or implant vitamin-producing genes into an agricultural crop to make it more nutritious.

Scientists have been honing their genetic engineering skills on commercial products since about the 1970s. In the 1990s they realized the power of this technology and decided to try it on humans to cure genetic diseases.

Gene therapy has been a mixed success so far. Some patients have died as a result of gene therapy, which is probably one reason why these techniques aren’t more widespread. Researchers are tirelessly working to improve the technology and make it safer for patients.

Gene therapy holds tremendous promise. To date, there have been hundreds of clinical trials, some of which have successfully treated or even cured diseases from Severe Combined Immunodeficiency Disorder (“bubble boy” disease) to congenital blindness. Some scientists are even using gene therapy techniques to cure certain kinds of cancer.

Scientists still have a long way to go before they perfect gene therapy techniques and make them safe, affordable, and effective for the remaining untreatable diseases. But the initial successes they’ve had are encouraging: for the first time in human history, we’ve been able to edit our own DNA to make us healthier.