Out of the Mediterranean

This unique climate type can only be found in five regions of the world. Together, these five regions only represent 2 percent of the land surface on Earth, but they contain nearly 20 percent of the world’s plant diversity! Scientists call it the Mediterranean climate type, but people call it by different names in the various regions it can be found. You may hear it called the Chaparral in southern California, the Matorral in Chile, the Fynbos in South Africa, the Mallee in Australia, and finally the Maqui in the Mediterranean Basin.

The Mediterranean climates are regions of Earth that people pay big bucks to live in! The weather is always beautiful, no matter the season. If you ever go to your chateau in the south of France, or if you “sit on your throne as prince of Bel-Air [California],” then you live in a ritzy area and a Mediterranean climate.

Even the philosopher Aristotle called the Mediterranean basin “the only place on Earth suitable for civilized life.” I’m sure people in Hollywood agree; they do share a similar climate. In fact, I think Lindsay Lohan said the same thing recently…

All five of these regions share similar geographical and topographical features which cause mild, wet winters and warm, dry summers. In the winter, Mediterranean climates typically see about 5-25 cm of precipitation and 40°-65° F temperatures. During the summer, the driest part of the season, they see very little precipitation (~0-5 cm), and 60°-85° F days.

Not all plant populations look like this in the Mediterranean climates, though. Remember when we walked from the “fire-house-habitat” to the “police-station-habitat” and the populations of people changed? Well, Mediterranean plant communities can have several different habitats, too. This is sometimes caused by changes in elevation, because air cools and precipitation increases as you get higher in elevation. This changes the habitat drastically, and plant populations change when you move from one habitat to the next.

Plants communities in the Mediterranean climate regions are uniquely adapted to live in dry climates, where water conservation can be a matter of life and death. Trees and shrubs typically lose a lot of water through their leaves in a process called transpiration. To avoid this, plants in the Chaparral have developed thick, waxy leaves to avoid dehydration. We call these types of leaves sclerophyll leaves. As opposed to the soft, juicy leaves found in deciduous forests, these leaves are hard, waxy and inedible. 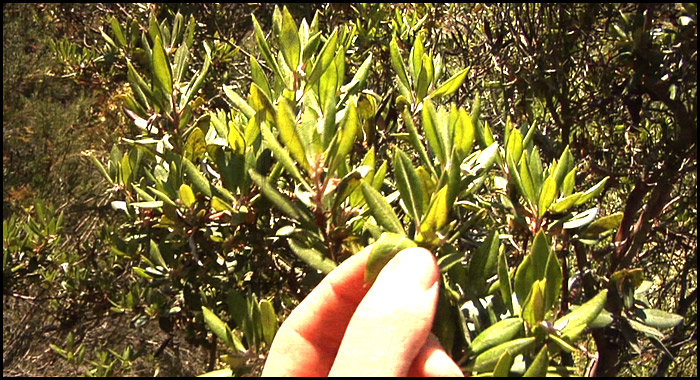 Many grazing animals can’t eat sclerophyll leaves because they are low in nutrients and can wear down their teeth over time. Often, the leaves contain strong-tasting oils which also help to deter herbivores. Humans are the exception to this rule: We like to munch on inedible things that taste good. Plants like Eucalyptus and Sagebrush produce resins and oils which we use for the pleasant aroma and flavor.

Plants that don’t lose their leaves change their position to reduce exposure to the hot sun. Just like you would rather stand up than lay down on a patch of hot sand, plants can move their leaves to avoid exposing their whole surface to the sun. Other plants don’t notice the heat of the sun because they have evolved lighter colored or hairy leaves. Would you rather wear all black or all white on a sunny day?

While leaves in these regions evolved strategies to stop water loss, roots evolved strategies to help them take up as much water as possible. Typically, we find that plants in the chaparral communities have both a long deep taproot, and a dense network of lateral roots close to the surface. Some trees in the Eucalyptus genera of Australia can have roots that extend 130 feet in every direction underground! Species of shrubs can have roots that extend 7 feet in every direction and produce thick, woody tubers called burls, which are found at the base of the plant. These burls are so thick they can even resist being burned all the way through in a fire.

Fire, along with drought, is a common visitor to these regions because dry, dense, and oily plants burn easily. Go figure! But fire is a necessary disturbance in these regions; it clears out the excess and recycles the nutrients in the soil. When the occasional fire does come raging through this habitat, plants deal with it in different ways. About half of the woody species in these regions quickly burn and then re-sprout from the fire-resistant burl at the base of their trunk. Using this strategy, shrubs can regrow to their original size in just a few seasons!

Other plants depend on an occasional fire to stimulate seed sprouting. Many species of plants in these regions will not sprout by watering alone. Instead, the thick outer coating of the seed must be scarred, normally by heat, in order to grow.

When the American cowboys and the Mexican vaqueros moved into what is now southern California, they would often have to ride their horses long distances each day to move their herds of cattle. This was a tough job! Not only did they have to deal with long hours, hot, dry weather and intense, and wild-west-style shoot-outs, but the low shrubby vegetation of the area destroyed their pants! Never mind the outrageous crime and death rate; their Levis were being torn to ribbons!

The Spanish had a name for those dungaree-unfriendly landscapes: the chaparro. Fashion experts at the time took inspiration from both the Native American and European pant protectors and developed light-weight leather chaps to protect the poor cowboy’s legs and pants.

I suppose the tassels were just for funsies.

Learn more about this biome