Lakes and Ponds represent a freshwater biome type that is generally referred to in the scientific community as a lentic ecosystem (still or standing waters). Scientists that study lakes and ponds are known as limnologists. In this overview we hope to describe a few of the biotic (plant, animal and micro-organism) interactions as well as the abiotic interactions (physical and chemical).

In this Untamed Science video we explore the lakes and ponds biome. While the rest of the crew enjoys the lake, Haley takes off canoeing in an effort to describe this amazing biome.

A lake can be divided into different zones: the littoral zone, the limnetic zone, the euphotic zone and the benthic zone. These zones are illustrated bellow. 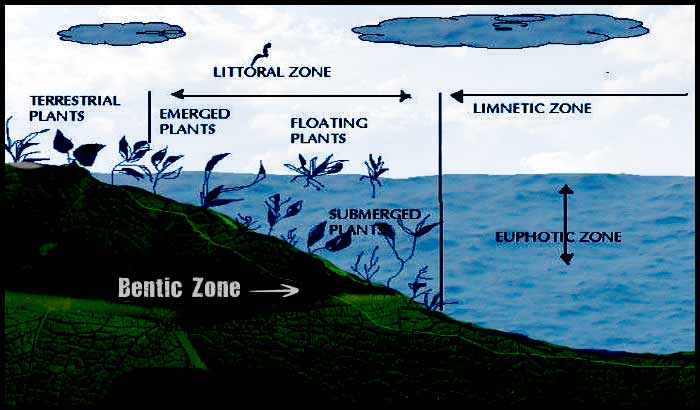 Intense heating of the surface waters of a lake help create a strong stratification of lake waters. The upper layer is known as the epilimnion.  This layer is affected by winds and stays fairly well mixed. Just below the epilimnion is the thermocline where the water stops mixing. It serves as a boundary layer for the cold, deep water below.  The hypolimnion is the cold, deep-water, stagnant layer. This layer often has very low oxygen in the water. This is often accompanied by dissolved hydrogen sulphide and other sulfurous gases. 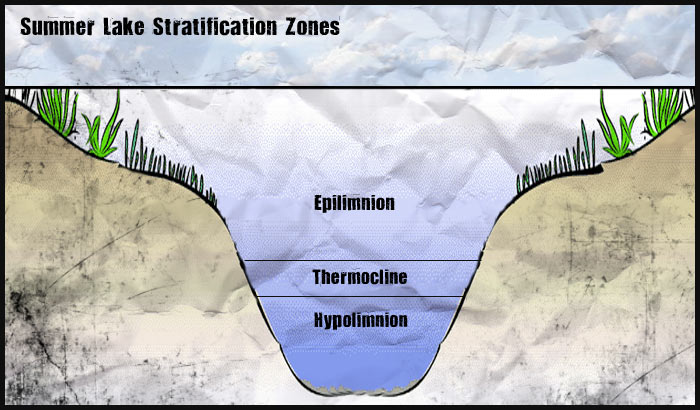 In temperate lakes, the changing of the seasons help move water in the lake. Tropical lakes often stay stratified because warm water always stays on the top. In temperate lakes the winter months chill the surface water so that it gets colder than the water underneath, causing it to sink. This happens in the spring and fall as shown in the diagram bellow. 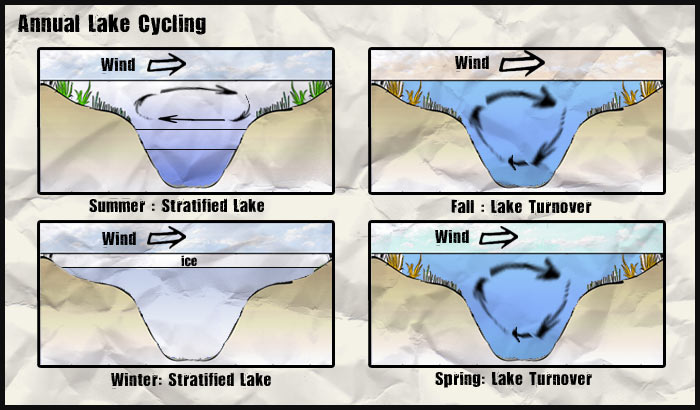 How do lakes form?

There are many different ways that a lake can form. One common way that lakes have formed in northern North America is through the recession of glaciers. Many of the lakes in Minnesota were formed in this way. The rift lakes in Africa are formed through tectonic activity as two plates separate from one another. Lake Tanganyika was formed in this way. Another great example of lake formation is the creation of oxbow lakes.  These lakes are formed when a meandering river bend is pinched off from the main channel.

How do lakes die?

Lakes by nature are ephemeral.  They all receive sediment input from rivers and streams that lead into the system.  Given that the lake is not expanding through tectonic activity, a lake has a limited existence.  The exact time that the lake may survive depends on the rate of sedimentation and the depth of the lake.

In the US, as in many countries, rivers and streams have been damned up creating lakes that did not exist before the dam construction. This creates a lot of new habitat for both animals and aquatic plants that can begin to colonize the area. It also provides a great place for invasive species to take hold, especially when there are little to no native plants in the area that are already filling available niches.

Some of the common invasive species in lakes and ponds include zebra mussels, sea lampreys, hydrilla, water hyacinth and Eurasian water milfoil.

The Alligator Snapping Turtle is found throughout the southeastern United States and can be a formidable sit and wait predator in this habitat.  It can grow to be over 100 years old and can be over 3 feet in length.  For this species profile video we traveled to Mississippi and the Vicksburg Army Corp of Engineer Research Facility.