The intertidal zone is defined as the area between the high tide and low tide mark.

Organisms that live in this zone have to deal with difficult environmental conditions, being both submerged in sea water and exposed to the air. They have to bear the great physical impact of waves, desiccation, and sunlight. Occasionally there are rains which saturate them in fresh water. There are lots of moving rocks and sediment in the water which can damage small critters. Plus, there is a risk of predation, not only from ocean-based animals but terrestrial animals as well.

We’ve created this video on the intertidal biome to give you a quick introduction to life in this habitat.

The tides are formed as a result of the gravitational forces between Earth, the sun and the moon. Twice a month the three will be aligned as a result of Earth’s movement around the sun and the moon’s orbit around Earth. When this happens, the gravitational pulls will be strongest ,and we will experience the greatest differences between high (flow) and low (ebb) tides. We call these tides Spring tides. On the contrary, the time half way between two spring tides, which occurs when we see the moon as half, the tidal difference will be the smallest, called Neap tides.

With this background it could sound like the size of the tide would only depend on the gravitational pulls between Earth, the moon and the sun, but this is not the case. The topography of the ocean bottom plays a great roll in how large the tide will be.

Intertidal habitats are found all over the world although the tidal range various extremely depending on location.

Some areas experience hardly any tidal difference at all. The west coast of Sweden in fact has greater ocean surface level differences depending on changes in atmospheric high- or low air pressures, which has nothing to do with tides. On the opposite side of the Atlantic Ocean, in South Eastern Canada, we find the greatest tidal differences in world in the Bay of Fundy. Spring tides here create a 20 meter difference between high and low tides. 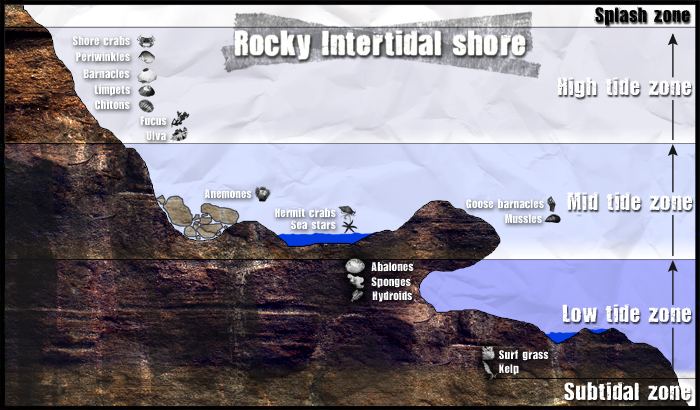 Adaptations by organisms in the Intertidal zone

The type of organisms occupying the tidal habitat varies greatly depending on where we are on the planet. For example, temperate rocky intertidal areas will have totally different species than a tropical mangrove habitat. Coral reefs are also often affected by tidal differences, which may even totally expose the corals out of the water during low tides.

The moving water exerts great demands on organisms in the area. If an organism lives on the substrate, it usually needs to have a way of either attaching itself to the substrate to prevent being washed away or being able to seek shelter. Barnacles settle and build a solid and permanently fixed structure on the rock. When under water, they reach out with a feathery appendage to strain the water for plankton and oxygen. When the tide goes back down, they close up the opening of the calcium structure with two plates to prevent desiccation and predation. Limpets are mollusks that stick hard to the rocky substrate by contracting the muscles in its foot and firmly grip the substrate. When times are not so rough, they use the foot to crawl on the substrate and graze tiny algae off the rock. Chitons are also mollusks with eight overlapping plates on their backs. The plates are flexible and allows the chitons to wrap around a stick to the hard surface with its muscular foot.

This is a short video profile of Kristin Aquilino, a Ph.D. Candidate in the Population Biology Graduate Group at UC Davis. Kristin studies community ecology in the rocky intertidal zone at Bodega Marine Lab in Bodega Bay, CA. This video was created as a final “video blog” project for the Scientific Filmmaking workshop at Bodega Marine Lab in October 2010. The workshop was taught by Colin Bates and Jeff Morales. This video was filmed and edited by Neil Losin, Kelvin Gorospe, and Annie Schmidt (narration by Kelvin Gorospe).