Estuaries Biome - What you NEED to Know!
MENU Skip to content

Where the Tide Meets the Streams

Estuaries are bodies of water formed where freshwater from rivers or streams connect with salt ocean water. The mixed water is called brackish, and the salinity may fluctuate dramatically for example depending on freshwater input from rains and waves and tides influences from the ocean. Estuary areas include river mouths, bays, lagoons and salt marshes.

Different types of estuaries & the zones of an Estuary

Depending on the amount of influence from freshwater and marine inputs and the circulation of water, different estuaries are divided up into different categories. A salt wedge estuary is the simplest type, occurring at a river mouth where the river flows directly into the ocean. The lighter fresh river water moves over the top of the heavier seawater. The river water is flushed out and pushes back the seawater, which in turn tries to move up into the river. The location of the boundary and amount of mixing may change depending on the amount of river output, waves and tidal influences. 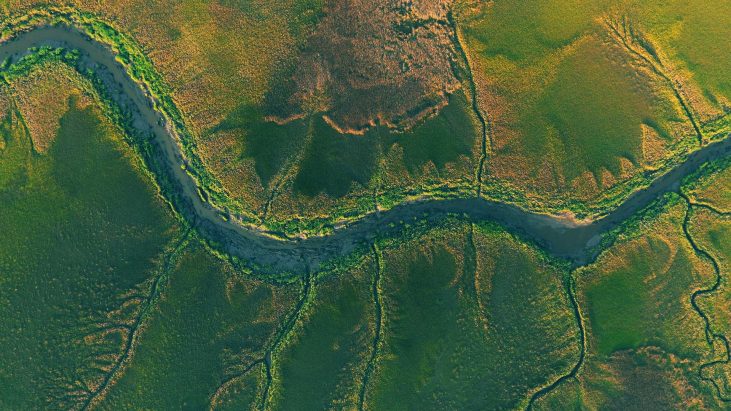 There are also Reverse or Inverse estuaries where the rate of evaporation is so high that salinity increases and can even be greater in the estuary than in the costal waters. When this extreme happens, the net water transport will be reversed: in at the surface (if coastal water salinity is lower) and out at the bottom (if evaporation has increased the estuary salinity so much that it is higher than coastal water and thus more dense).

The fjord-type estuaries of British Columbia, Alaska and Scandinavia are deep with a great input of freshwater from rivers and sometimes limited tidal influence. The lighter freshwater has a tendency to stay and sit on top of the deeper seawater, whereas the inward flow of seawater may be very limited.

Estuaries are not restricted to a certain climate region. They are found in temperate as well as tropical regions. The climate will have an impact on the types of species that are found.

Two major problems for organisms living in an estuary are fluctuations in salt concentration and sedimentation.

Organisms have various methods to control their salt intake. Osmoregulators actively regulate their salt balance (e.g. fish), whereas in osmoconformers, the organism’s internal salt balance adjusts to the external salt concentration in the water (e.g. most soft-bodied invertebrates). In both cases, dramatic or rapid changes may stress the organism and even kill it if not adapted to such fluctuations, which is why the variability in salinity of an estuary is one of the primary challenges for organisms living there.

Rains and river output often carry a lot of fine sediment that is deposited in the estuary. This often makes the water murky around river mouths. Sedimentation can also have adverse effects on many organisms. For sessile organisms (organisms that sit in one spot and can’t move) too much sedimentation can completely cover the organism and be fatal.

The fine sediment settles to the bottom and packs densely. Organic material that falls to the bottom is broken down by bacteria. The dense sediment often means that it is hard for water to aerate the bottom, which results in a poorly oxygenated bottom. The activities of these decomposing bacteria ends up using up much of the available oxygen. The end result is that many estuaries have bottoms with low concentrations of oxygen.

Still, many estuaries are areas of very high productivity and serve as homes to a great diversity of life, both in the water and above.

An Example Species: The Red Mangrove

In this short Untamed Science video, crew members Rob Nelson and Haley Chamberlain head out to the shorelines of Honduras to find the Red Mangrove, one of the most common mangrove plants. This is a great example of a plant adapted to the salty estuarine habitats. It can withstand salt water because it exudes salt from its leaves.