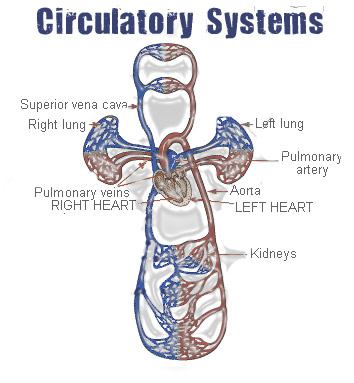 A classic way to think about the human body is to think about it as like a miniature city. Individuals in a city are like the different cells of your body. Groups of individuals work in offices, doing different jobs just like organ systems, which are made of many cells perform different jobs within your own body.  So what is the city equivalent of the circulatory system?

The circulatory system can be described as the road network within our city example.  Like a road system, it carries food to individual homes and carries waste away.  There are major highways (arteries and veins), and side alley ways (capillaries).  In our bodies, blood is a specialized bodily fluid that flows down the roads which carries nutrients and oxygen to cells and carries wastes like carbon dioxide and urea away.

y system.  Some of the major steps of the circulatory system include the passage through the heart (coronary circulation), the movement to the lungs where it picks up oxygen (pulmonary circulation), and the transport of that oxygen to the rest of the body (systemic circulation).

For our middle grades series with Pearson publishing we created a video for every topic in human biology. Pearson was kind enough to let us release a few, just so that you can get a taste for what we’ve been up to. In this video, we start off by using the road analogy to talk about the circulatory system. Jonas and Haley then take us all on an amazing journey through some of the most interesting facts about this human biology topic. We hope you enjoy it, we had fun making it!

Some of the biggest parts of the circulatory system include the following: