Have you ever noticed that on hot days when you havn’t had enough to drink, your urine is dark yellow or even orange?  At other times, when you’re well hydrated it can be almost clear. This is because you have a system in your body that helps you maintain homeostasis.  The water you drink doesn’t just dilute your blood, but is regulated by a series of organs in the excretory system.

Watch this video for a quick review.  Notice that the video calls the excretory system, the urinary system.  This is another common name for the system. 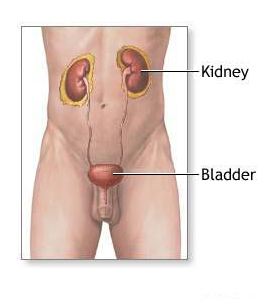 While the Excretory system is made up of the kidneys, the blood vessels that carry blood to them, the urinary vessels and the bladder, the kidneys play arguably the biggest role.

Humans have two kidneys that work identical.  The main role of the kidneys is to filter out waste from the blood.  To do this it first takes almost everything out of the blood, and then puts back only what the body needs.

Think of the kidneys as a person that sorts a messy drawer.  First, this person takes all the materials out of the drawer.  They sort through the items that were in the drawer and only put back the things that need to be there.  The rest of the material can be thrown away.  The kidneys are just the same.

A detailed look at the Kidney

To explain the action of the kidney we found a wonderful video produced from a grant made by the University of Rhode Island. While this video goes into more detail than  most  We found a great video that explains the action job of explaining how the kidneys are able to filter out ions.  Be warned that this is a college level video.

Transcription of the Video

We transcribed the content of the video to help those that would rather read the material.

As everyone knows, we have two kidneys each functioning independently. Diuretic action occurs in the kidney. This is where the body controls filtration, re-absorption and excretion of water, small molecules and ions such as sodium and potassium. The outer layer of the kidney is called the cortex, the inner layer is the medulla. This is where we have millions of special structures called nephrons. We will now zoom in to a single nephron.

The nephron is a tubular structure similar to a porous pipe or hose. The glomerulus serves as a starting point for a flow through the nephron. First, the blood enters the glomerus through the afferent arteriole. The blood exits the glomerus through efferent arteriole. The glomerus is where the blood supply is filtered by osmosis and diffusion. As blood passes through the porous capillary loops, water and molecules smaller than about 50,000 molecular weight are filtered, passing into the Boweman space. This creates the luminal fluid, flowing through the nephron tubule. About 1/5th of the total blood volume is continually filtered into the Bowman’s capsule. About 99% of this volume is reabsorbed, leaving only a small volume to be reabsorbed, leaving only a small volume to be excreted as urine.

Each section of the nephron has a different morphology of cells, making up the single cell wall which causes differences in water permeability and ion transport.

The next section is called the Distal Convoluted Tubule. This section does not allow water to reabsorb, but reabsorbs sodium through the sodium chloride ion cotransporters. The phioside diuretics act here on this transporter.

The last section of the nephron is called the collecting tubule.  Sodium channel blockers and aldestron antagonistic diuretics act here.

At each site along the nephron tubule certain molecules are able to permeate the wall and leak out into the interstecium. These molecules will be reabsorbed into the peritubule capilary and be returned to the peristemic blood supply.

Now we will zoom inside the tubule and then show the molecular details of reabsorption. This is a single layer of  cells making up the tubule wall. Ions and water molecules flow through the tubule.

This image shows a single cell layer making up the wall of the ascending limb of the nephron. This sodium reabsorption is driven by the sodium potassium ATPase transporter on the antiluminal membrane.

Then next site for diuretic action is the distal convoluted tubule. This is where the thiazide diuretics act.

The last site for diuretic action is the connecting and collecting tubules. This is where the sodium channel inhibitors act.

Thus, all of the diuretic agents described directly decrease the reabsorption of sodium by blocking specific ion transporters in the various segments of the nephron tubule. This indirectly affects re-absorption and excretion of water and other ions as described for each type of diuretic.