An Untamed Science Intro to the Nervous System

To begin our journey through the nervous system we thought it might be useful to watch this entertaining and informative Untamed Science short. In this video we explore animal toxins, and how they interact with the nervous system. We visit cone snail researcher J.P. Bingham at the University of Hawaii where new compounds are being discovered that may help save lives! This video was made for Pearson’s Miller and Levine Biology Textbook.

Have you ever pondered the multitude of processes made possible because of the central nervous system? We’ll give you a better understanding of the complexities of the nervous system here as we step through some of its major parts. We’ll start with a real life story that might help you understand how important this system is. Then, we’ll look at the brain, the spinal cord and nerves. We’ll see how each of the senses work, such as sight, hearing, touch, taste and smell. Finally, we’ll explore some interesting questions related to the nervous system.

Football and your Nervous System: 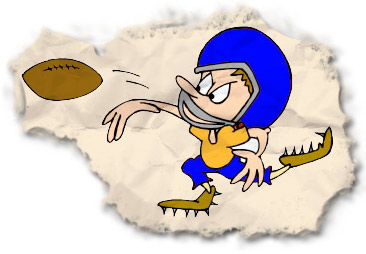 The wide receiver dashes down the field towards the end zone. As he turns back he sees the quarterback throwing a bomb to the end zone. His mind concentrates on the flight path of the ball, integrating information from his eyes and ears and communicating actions to his muscles. Without direct mental input, his heart beats faster and adrenaline hormones are being pumped through his blood stream. As he catches the ball, he sees an opposing player for a split second and then blackness.

While all body systems are extremely important to this player, we can take a closer look at how the nervous system plays an important role in this scenario.

The nervous system controls all the actions the player makes as he catches the football. Some of them are conscious movements, such as running, catching, jumping. Others, such as his heart rate and breathing are not conscious. He uses many different sensory mechanisms, such as touch, sight and sound. Nerves that connect his muscles to his brain are telling him about his surroundings. Different parts of the brain are working at the same time to then communicate the needed directions to catch the ball.

You may never realize quite how important your nervous system is until it gets damaged. When a player blacks out, it is often caused because there is damage to the brain, the main control center of your nervous system. Let’s give you a better idea of how the nervous system works by examining each piece in this complex puzzle.

The building blocks of the nervous system are our neurons.  Our nerves run through our body and help us interpret the outside world via thousands of neurons. These neurons connect end to end and transmit messages throughout the body. This message relay system is made possible via small electrical pulses that travel down the length of the cell. When it reaches a new cell, chemicals called neurotransmitters take over.

This diagram helps show what happens at the synapse between neurons.  At the synaptic cleft, or the junction between neurons, the “message” is transferred as packages full of neurotransmitters are released into the cleft.  These neurotransmitters, then bind to receptors on the new neuron. This binding action helps open ion channels.  These channels let ions move in or out of the neuron, starting a new action potential to continue the “message’. 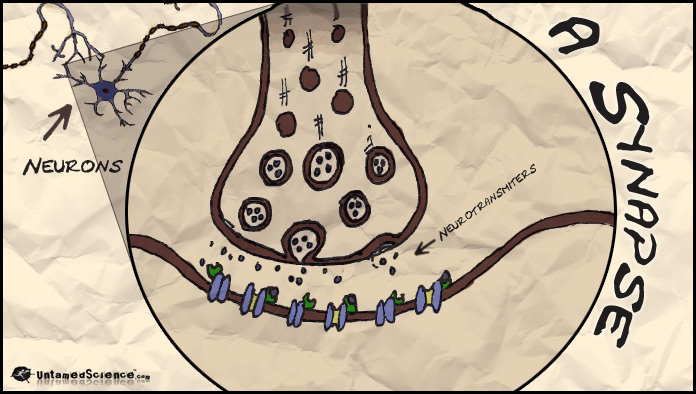 To understand the basics of the electrical impulse, lets look at how this action potential is formed.

A nerve impulse works because the neuron is able to change the electrical charge along the length of the cell. Its not a magical phenomenon but it does take energy input from the cell. The entire process is set in motion because protein pumps along the cell membrane change the concentration of sodium and potassium in the cell. These sodium potassium pumps move one potassium ion into the cell as it moves one sodium ion out.  A huge concentration gradient is set up. Sodium wants in and potassium wants out. Both ions are positively charged though, so there is no electrical potential. However, since some of the potassium is able to leak out of the cell, the entire cell ends up having a negative charge. This voltage differential is approximately -70 millivolts (mV) and is known as the resting potential.

It’s fairly easy to visualize nerves sending impulses to our muscles when we tell them to move. We move our fingers to type on the computer and we control where we walk. Yet, there are lots of muscles that are sent impulses without us even thinking about it. Muscles in our stomach move without use even knowing it. The motor division of the peripheral system also sends impulses to glands. We divide up the moto division into two classes – the autonomic nervous system and the somatic nervous system.

The somatic nervous system consists of muscles that are controlled consciously. When we move our skeletal muscles we do this all consciously. Most of the time we have full control over our muscles. Only during times of stress might the nervous system take over. When you touch something hot for instance, its sometimes hard to stop yourself from pulling away. Your blinking reflex is another example. Try not blinking when you sneeze for instance.

The human boy has the ability to sense the environment and respond to it. We can sense chemicals in our food. They give us smells and tastes. Cells in the back of the eye respond to light and help us produce images of the world around us. Cells in the skin respond to pressure, and allow us to feel objects. Our ears allow us to detect sound waves and aid in our balance. Each of these systems is complex, but they all work because of mechanisms that send stimuli to our central nervous system. The following are but a few of the senses and sense organs that help send information to the brain.

The central nervous system serves as the processing system for the nerve impulses received from the peripheral nervous system. All of our sense organs send information to the spinal chord and the brain. Both of these areas are responsible for complex task management. The spinal-chord does less processing, but is the root for most of our reflexes (automatic responses to stimuli). The brain on the other hand, is divided up into many regions, which control different parts of the body.

Almost all nerve processing takes place in the major regions of the brain – the cerebrum, cerebellum, and brain stem. Each of these regions controls a different part of the body. But the brain does more than just command the ever changing body. It also changes with time depending on environmental conditions. We’ve outlined the major regions of the brain below. Scroll over each section to learn about what it does.