From Nose to the Lungs

The respiratory system includes parts of the body that bring air to the lungs.  This includes the nose, pharynx, larynx, trachea, bronchi, and lungs as seen below: 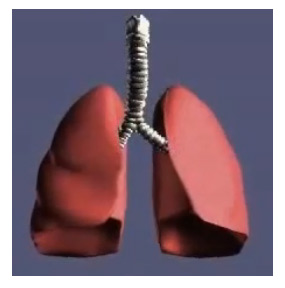 The nose serves as the first defense to foreign particles.  Have you ever thought about giving your dad nose hair clippers?  Those hairs serve an important role in trapping large particles in the air.  The snot that comes out of your nose also serves to trap particles. If you’re not convinced, notice how your snot changes when you’re breathing in smoke and dust.

From the nose, air flows down the pharynx.  Up to this point, air and our food will flow down the same pipe.  However, a small flap known as the epiglottis helps to send air and food down different tubes.  Air continues to flow down the larynx, the area where our vocal chords are found.  From here it inters the trachea.  The trachea has small cilia that help trap any extra foreign particles.

From the trachea the air enters the two bronchi of the lungs.  At the end of each bronchus is one of our two lungs.

From the Lungs to the Blood

Humans have two lungs, each fed by one bronchus.  The bronchi, that feed the lungs with air split into smaller and smaller tubes, called bronchioles, that eventually lead to small air sacs called alveoli.  The alveoli are grouped into small clusters and are wrapped in a tight network of capillaries.  Each capillary interacts with one alveolus to get oxygen to the red blood cells and release carbon dioxide.

Have you ever taken a yoga class where you have been asked to take deep breaths and control your breathing?  If so, you’ll have realized that we can consciously control when we breathe.  However, most of the time we don’t have to think about breathing, and thus, you could say that your nervous system controls it without us having to even think about it.  But how exactly do we force air in and out of our lungs?

Our lungs can pump air in and out because of the muscles of the ribs and our diaphragm.  Our diaphragm contracts and the rib cage enlarges as we inhale.  Exhalation is caused by our rib cage shrinking and the diaphragm relaxing. Extra force is created when we blow on a fire as abdominal muscles contract.

Competitive free divers need to understand how their respiratory system interacts with their circulatory system and nervous system.  They can do exercises to increase the size of their lungs.  They can train their brain to allow them to hold their breath longer and they can do certain warm-up routines to decrease the amount of carbon dioxide in their blood.  Lets explore in detail how a free diver uses all these techniques to master his sport.

First, the size of the lungs can directly affect how much oxygen the free-diver is able to get to his blood. Free divers will do exercises that slowly, over time allow their lungs to get bigger.  One of these exercises might involve taking large breaths.  Once a large breath is taking, a free diver might try to “pack” his lungs by gulping more air.  This exercise is somewhat dangerous, however, and unless  you are trained by a professional and it shouldn’t be attempted.

The second thing a free diver must understand is that the brain uses certain cues to initiate breathing reflexes.   In particular, a part of the brain known as the medulla oblongata is able to monitor the carbon dioxide level in the blood.  When levels get too high, breathing reflexes are initiated.  Note that it is NOT the amount of oxygen in the blood that induces breathing.  Knowing this a free diver may hyperventilate to remove more and more carbon dioxide before diving.  This essentially tricks the body into not initiating a breathing response.  This technique, however, is somewhat out-dated.  The technique is extremely dangerous and could lead to shallow water blackout (where a free diver looses consciousness due to lack of oxygen – often this happens as the diver ascends to the surface and the partial pressures of certain gasses change).

Finally, a free-diver can train to help slow his heart rate during a descent.  This decreases oxygen consumption to skeletal muscles, and thus increases the amount of time a diver can stay underwater.

Our respiratory system is extremely important.  It works hand in hand with the circulatory system to get oxygen to the cells that need them and it helps transport carbon dioxide out of the body.  One should note, however, that the respiratory system of mammals isn’t necessarily how all animals’ respiratory systems work. Birds for instance, have a drastically different breathing technique that allows them to get even more
oxygen from each breath.  We encourage you to explore as much as you can about the adaptations of different animals.  How might their own respiratory systems aid them in how they live?  Here are some things to think about:

We hope these questions help you think of more!  In fact, share your questions with us in the comment section below.  Together we may be able to answer yours!